The sale of Snapdeal to Flipkart is witnessing delays on account of complex due diligence process and small investors asking greater clarity on its terms of sale. However, the sale is expected to be concluded by July this year. 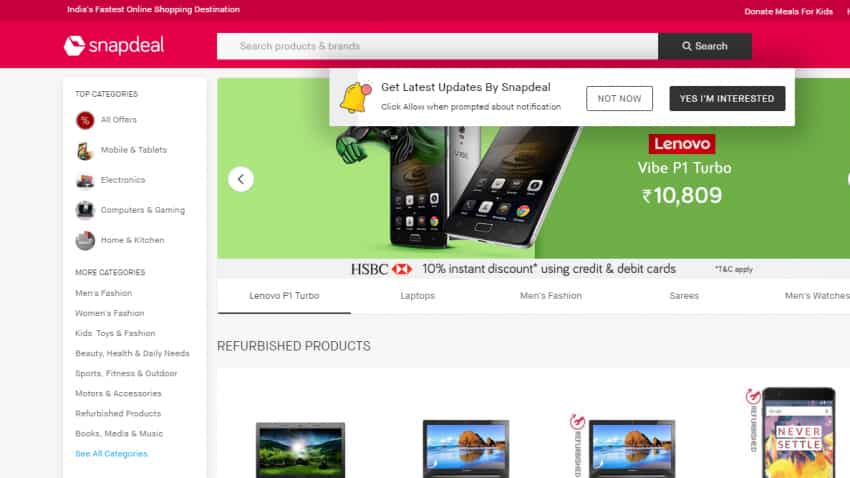 1. The sale of Snapdeal to Flipkart is expected to conclude sometime in July this year

2. Flipkart is expected to pay slightly less than its preliminary offer of $1 billion to buy out Snapdeal

The sale of Snapdeal to homegrown e-commerce major Flipkart is witnessing delays on account of complex due diligence process and small investors asking greater clarity on its terms of sale, according to media reports.

Japan's telecom and internet company SoftBank, which is the largest shareholder in Snapdeal, was expected to conclude its sale to Flipkart by June this year but it is likely to get delayed by another month, The Economic Times reported.

Recently, one of the Snapdeal's small investor PremjiInvest a personal investment arm of Wipro's chairman and billionaire Azim Premji, had written a letter to the Jasper Infotech board, which runs Snapdeal, cited the news report quoting three people familiar with the development, as saying.

In its letter to Jasper Infotech, PremjiInvest has outlined its concerns over the transaction, which aims to close the sale of Snapdeal to its Bengaluru-headquartered rival for $700 million-$1billion.

“Of course, the smaller shareholders are not happy since they want a larger exit payout—but they have no power to hold up the deal. The sale will go through irrespective of whether the smaller investors are on board or not,” Livemint reported quoting a person familiar with the development, as saying.

Such payouts are expected to be made to early investors like Nexus Venture Partners and Kalaari Capital, besides company founders Kunal Bahl and Rohit Bansal, the person told the newspaper.

In May, Vani Kola, the managing director of Kalaari Capital, resigned from the board of Snapdeal. Nexus Venture's Suvir Sujan, Bahl and Bansal still hold seats on the board of the company.

"The small shareholders in Snapdeal are big guys," said one person privy to the negotiations to The Economic Times. The person reckons that over a dozen shareholders, who together own 15% stake in Snapdeal, are planning to join forces.

However, Snapdeal’s sale to Flipkart is on track despite the delay with the due diligence process, Livemint reported quoting the two people familiar with the matter, as saying.

The deal is expected to conclude sometime in July, they added. The due diligence process had started last month, cited the Livemint news report.

Flipkart is expected to pay slightly less than its preliminary offer of $1 billion to buy out Snapdeal, with the final deal value expected to be in the range of $700-900 million, the news report said citing two people familiar with the matter.

The process of going through the details of Snapdeal’s books and its various subsidiaries has proved to be more complex than anticipated, said both the people to Livemint.

The prolonged due diligence has also held up a separate transaction to sell Snapdeal’s payments business FreeCharge. In May, Paytm had offered to buy FreeCharge for $40-50 million as part of a fire sale, it further added.

It said that some experts tracking the sale talks have questioned the viability of this deal for Flipkart, which will have the added burden and distraction of integrating Snapdeal months after it bought out eBay’s India business amid a bruising tussle with deep-pocketed rival Amazon India.

Nexus Venture Partners and Kalaari Capital have been locked in a tussle with SoftBank over the company’s valuation in a potential sale or funding round over the past few months, the newspaper said.

Snapdeal is the largest investment for Kalaari and Nexus, and a bad deal could be damaging for the two home-grown venture capital firms.

Since the preliminary informal offer, SoftBank and other key shareholders including Nexus and Kalaari have come closer to resolving their differences on the terms of the sale, the two people cited earlier told the newspaper.