While there had been speculation earlier that Paytm was looking to buy Freecharge, this latest development puts all rumours to rest. 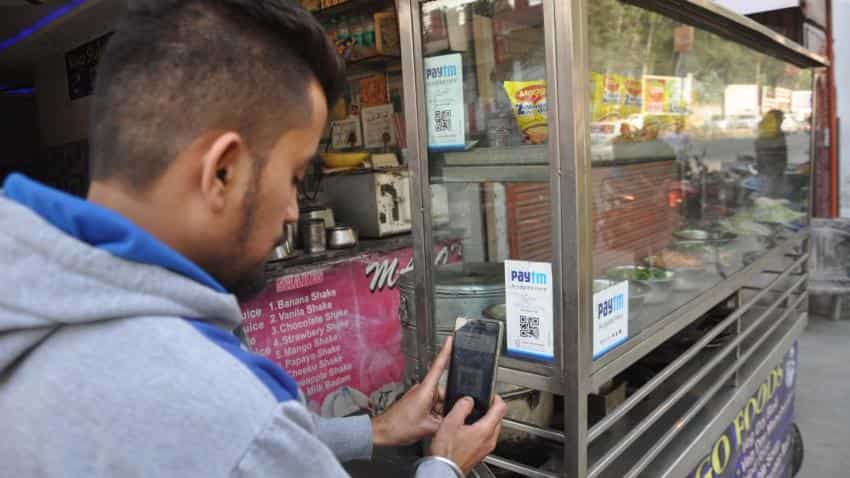 A man using his phone to scan a QR code to make a payment on Paytm. Photo: IANS
Written By: ZeeBiz WebTeam
RELATED NEWS

In a big development in the mobile wallet space, Paytm has signed a non-exclusive team sheet to acquire its rival Freecharge. The Alibaba backed group will acquire the Snapdeal-owned digital payments platform in an expected all-cash deal, according to Economic Times report.

While there had been speculation earlier that Paytm was looking to buy Freecharge, this latest development puts all rumours to rest. Besides Paytm, several other companies were in the race to acquire the company when Snapdeal put it on sales, including MobiKwik, PayPal, Flipkart, among others. MobiKwik was looking for a merger deal with Freecharge.

At the end of April it was reported that Paytm was looking to acquire Freecharge for a discounted price of 50% at $150-200 million. Now, however, it looks like that selling price may have gone much lower as the ET report says that the deal is estimated between $45 million and $90 million and could be finalised by the end of the month.

It seems that Paytm has struck the deal at the right time and got the most of it. Taking advantage of the downfall of FreeCharge's parent company Snapdeal, whose leading investor SoftBank is currently in talks for its own sale to Flipkart, the company has been able to acquire Freecharge for a lower than expected deal value.

Just a day back SoftBank announced in its annual results report that it had written off over Rs 6,400 crore ($1 billion) on the valuation of its investment in Snapdeal. SoftBank's talks with Flipkart on the sale of Snapdeal has been reported to be inching closer. Paytm striking this deal for Freecharge's acquisition comes at the right time as to avoid it losing the subsidiary to Flipkart if the Snapdeal was sold before.

While Paytm has been the miles ahead in the mobile wallet and digital payments race, this deal with Freecharge maintains its dominance. Competitors such as MobiKwik, PayU and others could face much more rivalry in the market as a result.

The Vijay Shekhar-led Paytm, which catapulted it to the top after capitalising on cashless payments soon after demonetisation, now is seen as the best pick for investors and venture capitalists. It is now in advanced stages to raise up to $1.9 billion in fresh funding from SoftBank itself, according to the report. This would value it between $8 billion and $9 billion.

Freecharge is estimated to have recorded Rs 300 crore in transaction revenue and about 12 million in volume in April. In addition, FreeCharge is expected to have around 50 million users currently, as it had 30 million user base in October 2016.

Paytm could benefit the acquisition as it would take its user base over 250 million. Paytm announced that it had crossed 200 million user base by February this year.

This will be much needed as MobiKwik during the same month had invested $45 million to expand its user base to 150 million.