Lok Sabha election results 2019: For the first time in 30 years, the people of India have shown their faith in a government for second consecutive term as Narendra Modi-led NDA swept over 350 seats in Lok Sabha elections 2019, retaining power with a massive majority. 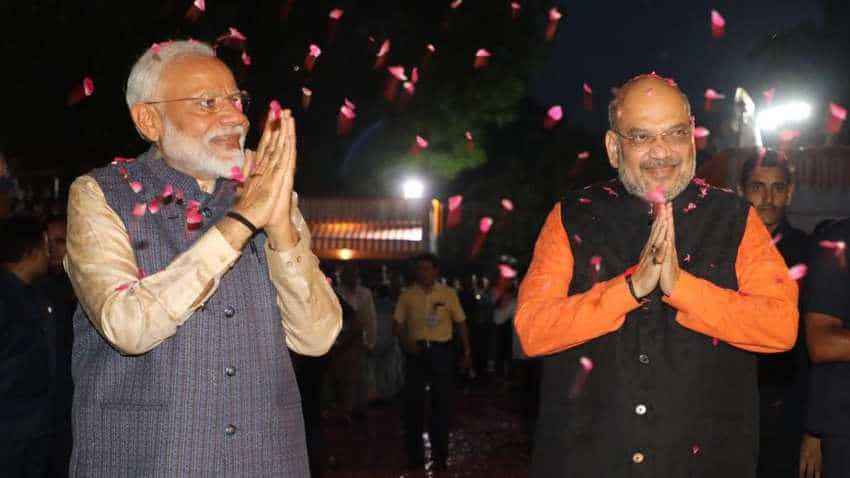 While NDA's win comes as a massive setback for Congress and other opposition parties, the country can expect more jobs, entrepreneurship incentives and economic growth. Source - BJP/Twitter.

Lok Sabha election results 2019: For the first time in 30 years, the people of India have shown their faith in a government for second consecutive term as Narendra Modi-led NDA swept over 350 seats in Lok Sabha elections 2019, retaining power with a massive majority. While NDA's win comes as a massive setback for Congress and other opposition parties, the country can expect more jobs, entrepreneurship incentives and economic growth. Prof. Indradeep Ghosh, Associate Professor and faculty Dean, Meghnad Desai Academy of Economics told Zee Business Online that Modi's return to PM office warrants a stronger push to create more jobs.

"The decisive return of Modi to the PM's office probably signals and certainly warrants an even stronger push towards structural reform in India, and in particular, the formulation of a comprehensive strategy to create more jobs for Indian youth, that must incorporate a critical role for India's educational system which is long past due for a massive overhaul," he said.

"Markets will respond with lower volatility and higher volumes, especially in the indexes. The RBI  Governor can now pursue the growth agenda unfettered. He has been remarkably prescient with both his Dollar Swap and in calling for exotic derivatives. The stage is now perfectly set for both. The stage is equally set for developing the Fixed Income and Debt Derivatives market and drive growth up by at least 3 percentage points up for the medium to long term," he said.

A positive market sentiment was seen in the stock markets as well on Thursday as the early numbers suggested a win for NDA with both Sensex and Nifty hitting all-time highs before ending in red. Ravi Kumar, CEO and Co-founder of UPSTOX said that the market movement is line with investor expectation that a stable regime will return.

"The unanimous verdict in favour NDA- led government will help boost investor sentiment as a stable regime enforces better implementation of policies. Even as global markets remain volatile due to rising geo-political tensions, India is expected to be a favorable investment destination. Markets are likely to go for a bull run given that the business-friendly policies and structural reforms initiated by NDA government in the last few years are bound to gather pace," he said.

During the initial years of his first tenure at the Centre, Modi pushed many reforms for startups and MSMEs and Rajan Navani, Vice Chairman and Managing Director, JetSynthesys believes that more entrepreneurship incentives can be expected over the next five years.

"It is indeed exciting to welcome back the ‘Always Investible (AI)’ PM Modi. The citizens of India have invested their future, their hopes and aspirations for the next five years in him and I look forward to there being increased momentum in every aspect of economic development including a huge push to empower the people of India with jobs through entrepreneurship incentives and leveraging digital first technologies in every aspect of nation development," Navani, who is also the Chairman of the Confederation of Indian Industry (CII) National Council on Future Businesses and Artificial Intelligence, said.