In Uttar Pradesh, the saffron party made a huge comeback improving its tally to 62, the SP-BSP Mahagathbandhan managed 5 and 10, respectively, while Congress somehow was spared the royal humiliation, as UPA chairperson Sonia Gandhi`s Rae Bareli seat remained with the party,while others got 2. 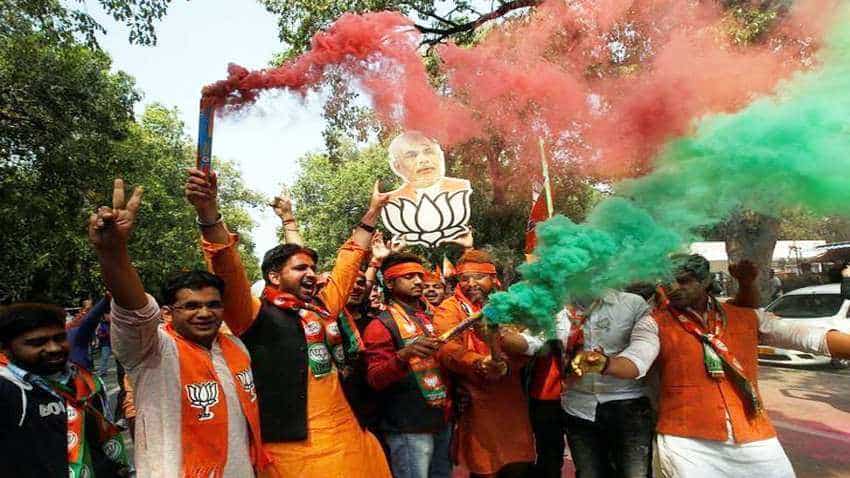 The BJP`s resounding victory in the Lok Sabha elections that saw Prime Minister Narendra Modi make headlines across national and international dailies and also paint a vast swath of the mainland saffron brought in its wake some outstanding results from a number of states. In the final tally that the Election Commission continues to update the most striking numbers for the Bharatiya Janata Party were in West Bengal, where they decimated the Mamata Banerjee led ruling dispensation Trinamool Congress. To the eight years of Trinamool at the helm the Amit Shah-led BJP pulled up the biggest upset, falling just short of three seats to the TMC`s figure. The final tally of 42 seats: BJP- 18, TMC- 21, Congress-3.

In Uttar Pradesh, the saffron party made a huge comeback improving its tally to 62, the SP-BSP Mahagathbandhan managed 5 and 10, respectively, while Congress somehow was spared the royal humiliation, as UPA chairperson Sonia Gandhi`s Rae Bareli seat remained with the party,while others got 2. Maharashtra where the ruling BJP has not had a very happy bon homie with its ally Shiv Sena, it managed 23 seats, while Sena 18, Sharad Pawar led NCP got 4, Congress won the lone seat in Chandrapur defeating Union Minister Hansraj Ahir, and others two.

In Bihar, the BJP-JD-U, got 17 and 16 respectively, while the Congress again managed only one seat that of the Kishanganj constituency. The others bagged 6. The biggest upset was for the jailed RJD supremo Lalu Prasad, whose Rashtriya Janata Dal could not manage even a single seat amid the bickering among his sons.

In the national capital and Uttarakhand, it was BJP all the way as it managed all seven seats and five seats. It sweeped Gujarat, Haryana and Himachal as well, bagging all 26, 10 and 4 seats, respectively. In both Madhya Pradesh and Rajasthan, BJP fell short by a single seat of a complete sweep. The Congress` humiliation was completed with Madhya Pradesh joining the other heartland states bowing to Modi brand of "nationalism".

BJP won 28 of 29 Madhya Pradesh seats and 24 of 25 in Rajasthan. Barring Chhindwara that returned the sole Congress candidate Nakul Nath, the BJP swept all including the Guna seat held by Congress General Secretary Jyotiraditya Scindhia. The Congress` presence in the north was only defined by eight seat win in the Captain Amarinder singh led Puanjab, where the BJP and Akali`s managed two seats each. The Arvind Kejriwal led Aam Aadmi Party was one of the greatest casualties, that manged only one seat by Bhagwant Mann in Sangrur.

In the Northeast, Assam where BJP got 9 seats, Congress 3, while other 2. In Arunachal Pradesh and Tripura, the BJP emerged as sole winning party as it bagged both seats in both states. In Manipur the saffron party got 1, while the second seat went to others. In the South, the BJP could not open its account in Kerala, where Congress bagged 15 of the 20 seats, the grand old party`s only saving grace as their party chief managed to hold on to the Wayanad seat with record margin, after losing the family borough Amethi to BJP`s Smriti Irani in a see-saw battle. The Left got one seat with the CPM winning Alappuza and other managed 4.

In Tamil Nadu, the DMK made a comeback with 23 of the 38 seats in contention, as voting was cancelled for the Vellore seat. Congress won 8, while the AIADMK managed only one. While the BJP could not open its account in the state, the others got 6. In Jammu and Kashmir, though, the BJP riding on the Balakot airstrike bagged 3 of 6 seats, while the rest went to others. Mehbooba Mufti`s PDP and Congress could not open theior accounts. In Odisha the battle went to the wire, but the Naveen Patnaik led BJD bagged 11 of 21, while BJP make gains with 9 seats bettering its previous hold and the Congress got one.

Is this the right time to invest in mutual funds? Ajay Bagga explains why you shouldn't be bothered by this question