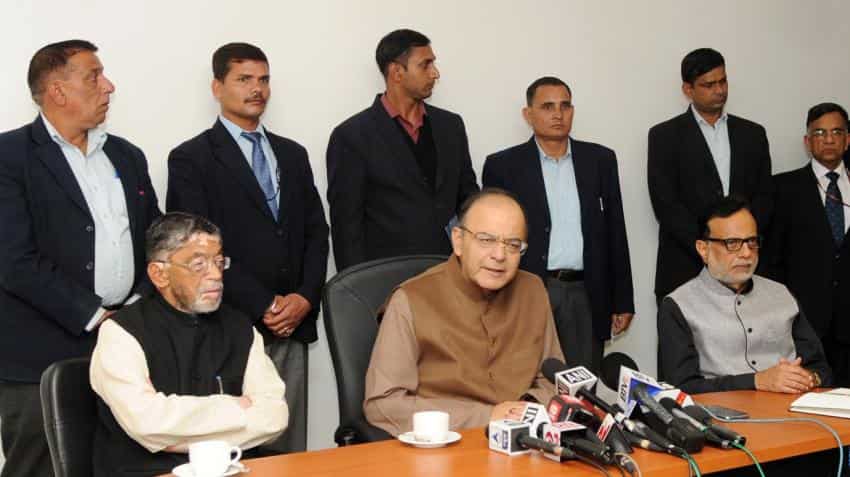 Finance Minister Arun Jaitley said the law to provide for compensation to the states for loss of revenue was also approved by the GST Council at its two-day meeting which ended on Friday. Image Source: IANS/PIB
Written By: PTI
RELATED NEWS

The all-powerful GST Council on Friday made a 'reasonable headway' on supporting legislations for the new indirect tax regime but its rollout from April 1 looked virtually impossible as it postponed discussion on the critical issue of administration and control of tax payers.

The panel, which met for the seventh time since the Constitutional Amendment to replace central and state taxes with a Goods and Service Tax (GST) was approved in mid-September, tweaked the periodicity of payment of compensation for loss of revenue to states for implementation of GST to bi-monthly instead of previously decided quarterly payment.

Also, the Council decided to create the kitty for the compensation 'from any other tax' besides the cess on luxury and sin goods it had previously approved, as states saw revenues being dented by slowdown in economic activity and resultant tax collections following demonetisation.

The GST Council will meet again on January 3-4 and take up the issue of which part of tax payers should be controlled by the Centre and who should be governed by the states after a single tax will replace levies like central excise, service tax and VAT.

The dual control is also part of the Integrated-GST (IGST) legislation that Parliament needs to pass before the new regime is rolled out.

But for this stumbling block, mirror legislations of Central-GST (CGST) and State-GST (SGST), that have to be approved by Parliament and state assemblies respectively, neared finality with most clauses agreed upon.

Finance Minister Arun Jaitley said the law to provide for compensation to the states for loss of revenue was also approved by the GST Council at its two-day meeting which ended on Friday but a final draft with legal language would be approved at the next meeting.

"I am trying my best," he said, when asked about the April 1 rollout schedule. "I am not going to bind myself with anything. Our effort is to do it as quickly as possible and I think we are making a reasonable headway."

Three consecutive meetings of the GST Council have not been able to take up the issue of dual control. Some states like West Bengal and Kerala want a minimum turnover criteria be fixed to decide who control which assessee, a proposal the Centre is not agreeable to because states lack expertise on levies like service tax.

"If you ask me what are the principle residuary items left, the main item of course is the IGST and dual empowerment issue. The second is the legally vetted language which will be placed in the next meeting on January 3-4," Jaitley said, adding that the Council will take up items in each tax bracket after that.

While the compensation was earlier proposed to flow from the cess to be levied on luxury cars and sin goods like tobacco, demonetisation has led states to believe that more number of them would need support to make up for the revenue loss arising from GST roll out.

It was previously thought that 4-5 states will need compensation for revenue loss, the economic activity being impacted by demonetisation of Rs 500 and Rs 1,000 notes would necessitate support to even more states because of loss in tax revenues.

According to sources, the 'source of compensation fund' part of the law is being redrafted to say that compensation amount would be raised from cess and 'any other taxes as the GST Council decides'.

"Most states feel that their revenues will drastically fall in third and fourth quarters," Mitra said, adding that quantum of compensation is going to be much larger than Rs 55,000 crore.

On the issue of dual control, he said there is only one law and two bureaucracies so the question is how the jurisdiction will be divided for audit management.

"It will be resolved through deliberative mechanism," he added, adding today's meeting decided that compensation would be paid to states every two months.

As per the GST compensation to states, Jaitley said the states would be fully compensated for any revenue loss for initial five years and the compensation law has to be approved by Parliament only.

"The basic draft of that has been approved. There was one clause in particular about the source of the compensation fund of which language will be redrafted and the legally vetted language will be placed before the next meeting of Council," he said.

Jammu and Kashmir Finance Minister Haseeb Drabu said the GST Council can look into various options, including increasing the number of years for compensation from 5 to 6 or set up a revolving fund in case the amount shoots above Rs 55,000 crore.

Minister K Pandiarajan, representing Tamil Nadu, was of the opinion that there is "good chance" that compensation amount required would be more than the specified amount of Rs 55,000 crore.

Andhra Pradesh Yanamala Ramakrishnudu in a statement said his does not accept levy of Cess by the Centre on certain goods to compensate the states for loss of revenue.

"The proposal to levy cess on certain goods, instead of compensating from the revenues of Consolidated Fund of India of the Union, is not at all justified," he said.