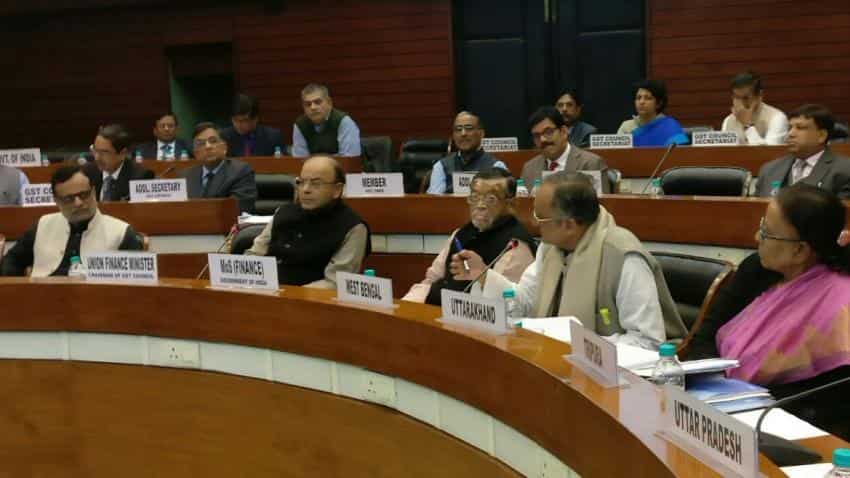 The GST panel will be meeting again on January 3-4, the source said. Photo: Ministry of Finance
Written By: ZeeBiz WebTeam
RELATED NEWS

Along with Jaitley, state ministers were also present as members in this seventh meet.

As per the sources, the Council has finalised the compensation rules.

After the meeting, while addressing the media, Jaitley confirmed that GST Council has approved CGST and SGSTdraft laws.

"GST dual control and cross empowerment yet to be resolved", Jaitley said.

The GST panel will be meeting again on January 3-4 to discuss on dual-control, the source said.

He also mentioned that the Council is making effort to roll out GST as quickly as possible.

As many as 20 chapters of the model GST law cleared in its last meeting earlier this month.

After the GST council meet, Rashmi Deshpande, Associate Partner, Khaitan & Co, said, "GST Council’s 7th meeting concluded with mixed results. Fortunately, CGST & SGST drafts are approved and ready to be tabled before the Parliament and state assemblies. Even the basic draft of the Compensation bill has received approval. However, dual control over assesses and powers of states under the IGST Act needs further consensus.

"For the industry, this is indeed a major development as the framework of the impending law is available and the Parliament or the state assemblies may not deviate much from the draft. How effective were the innumerable representations would be known once the draft is made public. Nevertheless, be it April or September, it does seem that the GST is all set to be implemented in 2017."

REVEALED! How UPSC topper Pradeep Singh cracked civil services exam 2019 - This is his message for aspirants