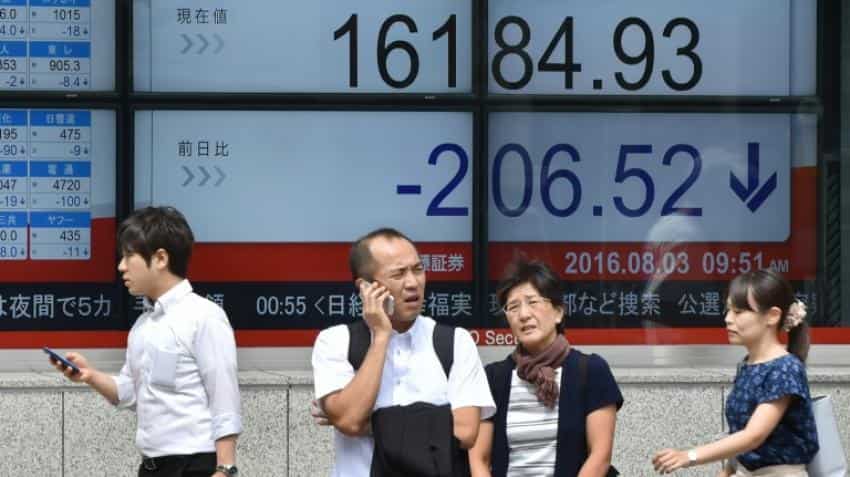 Most of the world`s main stock markets ran into profit-taking Wednesday prompted by weak data, mixed earnings and a sliding dollar, but London hung on by a thread.

Paris also ended the day slightly lower, while London's benchmark, which had lagged its peers on Tuesday, caught up to manage a small increase.

But Disney stock worked some magic, rising after an early drop in reaction to third-quarter earnings bolstered by blockbuster films.

The DAX had shot higher Tuesday to close up 2.5 %, as Germany`s trade surplus beat expectations to shrink only slightly in June after exports had returned to growth.

But dealers noted that low holiday season volumes meant that gains could unravel as quickly as they had materialised.

"Experience shows that any movement that is not underpinned by rising volumes or a catalyst has no staying power, so it`s best to remain cautious," said Thierry Claude, a portfolio manager at Barclays Bourse in Paris.

France provided such a catalyst on Wednesday when industrial production in the eurozone`s second-largest economy dropped for a second straight month in June, alarming analysts who had been looking for a modest increase.

Output fell 0.8 % in June, after dropping 0.5 % in May, with oil refining posting the largest single decline after strikes in France`s oil industry.

"The broad-based decrease in industrial output, again fuelled by unions` strikes, raises some questions on the strength of the French recovery," said Olivier Vigna, an economist at HSBC.

Earlier Wednesday, Tokyo stocks led most Asian stock markets lower in lacklustre trading as the dollar weakened against the yen after US government figures showed a decline in productivity.

Traders were cautious, with markets flitting in and out of positive territory despite a positive lead from the US, where the technology-rich Nasdaq ended at a new record on Tuesday.

The Japanese unit is seen as a haven investment in times of uncertainty, but a stronger yen is negative for Japanese shares because it dampens the overseas profitability of exporters.

Shares in the make-up giant plummeted 7.5 % after it cut its full-year profit forecast the previous day, blaming the yen`s rise.