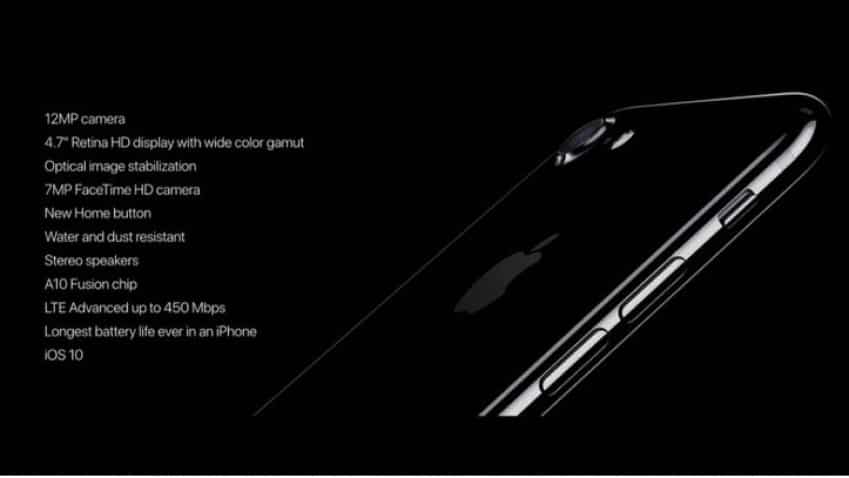 Apple's chief executive officer Tim Cook while launching the phone said, “We have now sold over a billion of iPhones. This like iPhone is the best selling product of its kind in the history of the world."

"It's the best iphone that we have ever created. This is iPhone 7," he added.

According to Zee Business sources, the iPhone 7 and iPhone 7 Plus will cost Rs 53,000 and Rs 61,000, respectively in Indian market.

Apple has been looking to the sales of the iPhone 7 as the sales of its smartphones have slumped in recent months, due to the iPhone SE failing to grab users attention, ZeeBiz reported earlier on Wednesday.

The company before the launch of the phone tweeted iPhone 7 photos:

Apple said that it sold 40 million iPhones in the third quarter ended June 30, 2016 and earned a revenue of $24 billion.

"There are new Pokemon Go complications for your watch face. It shows you how long you have to walk to hatch an egg, when you're close to a pokestop, and even level stats,"said Niantic chief executive officer John Hanke while talking about Pokemon GO for the Apple Watch.

Key features of iPhone 7 and iPhone 7 plus are:

There's a new reefined design for iPhone 7 called as Jet Black. It has high glass finish and has stainless steel Apple's logo.

The company has redesigned its home button for iPhone 7 and iPhone 7 Plus. For instance, feedback for messages, ringtones, musics ,etc., notifications users can get it through home button in new phones.

The new inclusion in iPhone 7 and iPhone 7 Plus are water and dust resistant.

With iOS 10 on iPhone7 and iPhone 7 plus, users can edit the live video footages and images.

Rupee Vs Dollar: Rupee gains 9 paise to close at 81.50 against US dollar