At least 34 people, including 21 from Puri district, have so far lost their lives on account of the cyclone Fani which hit Odisha on Friday, causing havoc in several parts of the state. 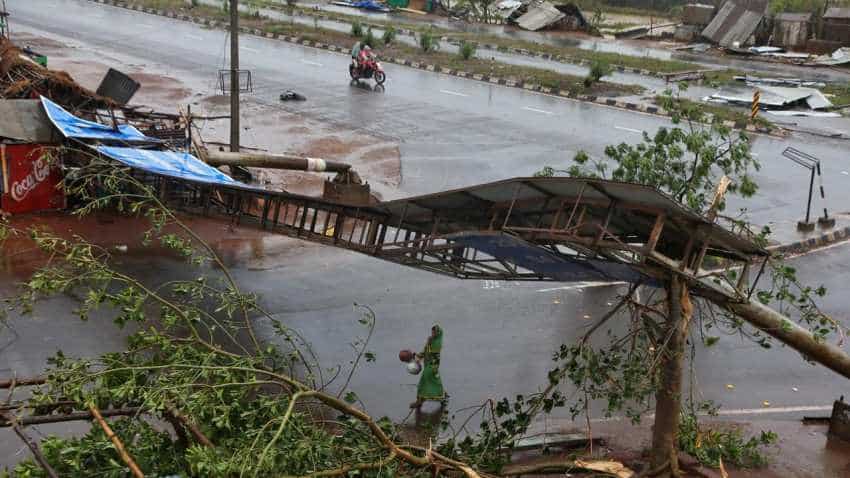 The Odisha government informed the NCMC that restoration of power and telecommunication infrastructure continued to remain the major priority in the cyclone affected areas of the state. Image source: Reuters

The Union Home Ministry on Monday released an additional financial assistance of Rs 1,000 crore for Odisha, which has been ravaged by cyclone Fani, after Prime Minister Narendra Modi conducted an aerial survey of the affected areas and took stock of the relief measures earlier in the day. The Centre had sanctioned Rs 381 crore for Odisha last week. The Prime Minister also announced to provide Rs 2 lakh ex-gratia each for the kin of dead in the natural disaster and Rs 50,000 for the injured.

At least 34 people, including 21 from Puri district, have so far lost their lives on account of the cyclone. Fani hit the coastal state on Friday, causing havoc in several parts of the state. The National Crisis Management Committee (NCMC) led by Cabinet Secretary P.K. Sinha met again on Monday as a part of the coordination efforts and restoration measures in the areas of Odisha affected by the cyclonic storm, said a statement.

The Odisha government informed the NCMC that restoration of power and telecommunication infrastructure continued to remain the major priority in the cyclone affected areas of the state.

"Around 50 per cent power restoration have been reported while more works need to be done in Bhubaneswar and Puri. The NEET examination, which was postponed, will now be held on May 20. Medicines dispatched by the Centre have been received and all measures are being taken to prevent the outbreak of any disease," the statement said.

The option of deploying vehicle-mounted mobile towers, as requested by Odisha, was being explored to provide connectivity in Puri and Khurda, the statement said.

"More than 2,500 men are working in Odisha to restore power lines. The Steel Ministry has dispatched about 5,500 steel electric poles and another 15,000 will be supplied by May 14," it said.

Sinha also said that more manpower should be mobilised to restore power and suggested that mobile service operators needed to operationalise their towers in coordination with the state government.

The Ministry of Petroleum informed the committee that majority of the petrol and diesel retail outlets were functional in Odisha and that sufficient stocks of diesel and other fuels were available. It also said that three mobile diesel dispensers with a capacity of 6,000 litres each were being pressed into service.

The Finance Ministry has directed insurance companies to settle claims expeditiously, as per the statement.

The state-level banking committee has been asked to convene to coordinate all banking issues, including functioning of ATMs.

Indian Railways has resumed train services on all the lines in the state. The yard at Puri, which was extensively damaged, will be restored fully by May 12.

The Defence Ministry has moved diesel generators to Odisha and four helicopters of the Navy and the Indian Coast Guard (ICG) were engaged in relief operations.

The Navy and ICG were also running community kitchens for cyclone affected people, said the statement.