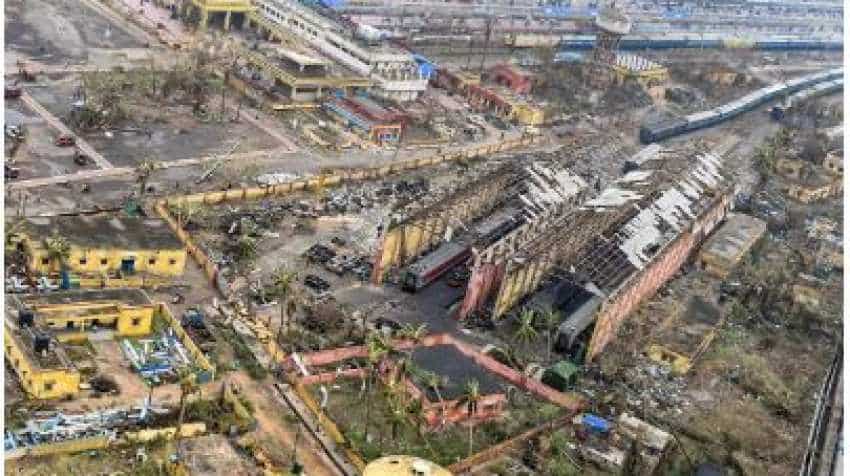 Puri: A bird’s eye view of the destruction caused by Cyclone Fani, a day after its landfall, as part of the aeriel surveillance by Coast Guard Dornier aircrafts to assess the damage caused by the cyclone, in Puri, Odisha, Saturday, May 4, 2019. PTI image

Union Petroleum Minister Dharmendra Pradhan has written to Finance Minister Arun Jaitley seeking special scheme to revive hotel industry in Puri in the wake of Cyclone Fani. In a letter dated May 9, 2019, Pradhan wrote, "Extensive damage has been caused to the economy of Puri district. Tourism, which is the mainstay of the district, has completely collapsed. Presently, the hotel infrastructure is in dire need of financial hand holding. It is imperative that the hospitality industry is revived so as to restore livelihood of people and benefit tourists/pilgrims. Similarly, extensive damage has also occurred in other cyclone-affected districts." Pradhan also made the following suggestions regarding the tourism sector in Puri:

1. To create a special scheme with beneficial interest rates for helping the hotel industry rebuild the damaged infrastructure in the cyclone-affected districts;

2. For other loanees, it will be helpful to re-structure the existing loan component. Productive sectors like poultry, fishing, agriculture and animal husbandry have also been badly damaged and will require adequate financial support at benevolent rates for revival in cyclone-affected districts.

3. It is also important to expeditiously settle the insurance claims of the claimants in all the cyclone-affected districts, whose property has been extensively damaged, to provide a fillip for reviving the economy.

Pradhan has requested the Finance Minister to instruct banks and insurance companies to undertake measures. "Implementing the above suggestions will go a long way in economic revival of the cyclone-affected districts of Odisha," he said.

The condition of the banking sector is also very bad in the Puri district. Pradhan wrote to the Finance Minister that there has been large scale damage to the existing bank branches and ATM facilities in the district of Puri. This is evident from the fact that only 20 of the 273 ATMs are presently operational in Puri. Also, only 25% of bank branches are functional.