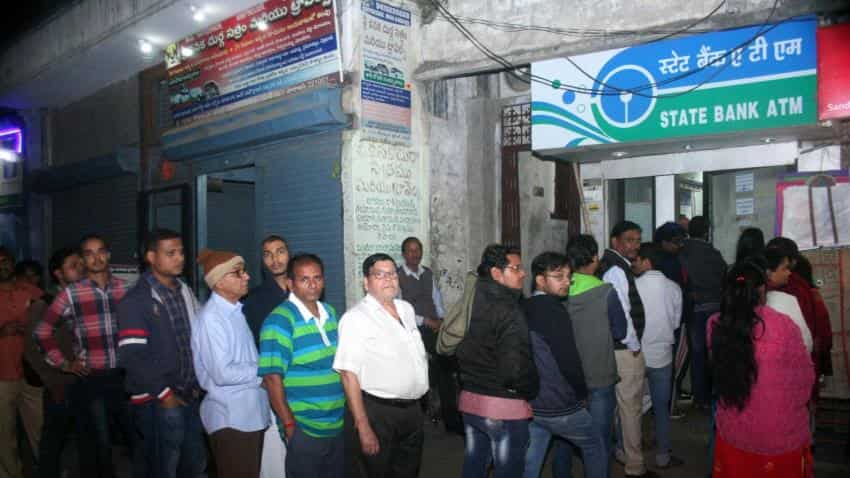 In apprehension of a mad rush at the beginning of next month, people started queuing up outside ATMs for withdrawal of cash to meet expenses for December in Varanasi on November 30, 2016. Image Source: IANS

People queuing up outside the banks and ATM kiosks continued to be a common sight in most parts of the national capital on Tuesday -- 28th day since the high-denomination notes were demonetised.

Being the commercial hub of the city, Connaught Place has been seeing an unprecedented rush at all its ATMs, with those dispensing cash witnessing long queues.

The ICICI Bank`s branch in `A` Block of Connaught Place could be seen catering to 70-80 customers in the early afternoon. An equal number of people queued up outside the adjoining ATM of the same bank.

A relatively less number of people stood in queues outside the Punjab National Bank (PNB) and the State Bank of India (SBI) ATMs in the same block.

The situation was more painful at the PNB`s Nangloi branch, where the desperate-for-cash customers crowded the whole length of the footpath outside the building.

The area, which is not known for any major commercial activity and largely inhabited by the people from lower income groups, witnessed a huge crowd thronging the bank. A large part of the crowd comprised small-time fruit and vegetable sellers and housewives.

The central government`s bid for a cashless, or less-cash, economy also seemed to be falling apart as a customer had to come out of a shop empty handed, since the card swipe machine refused to accept his payment due to "network failure".

"I had gone to buy eatables from my neighbourhood shop, but had to return empty handed as the card machine failed to work," Vikas Dattatrey, a media professional, told IANS.

Similar experiences relating to technical glitches and network failures were shared with IANS by some users of Paytm, an e-wallet site, used for online recharge of mobile phones and paying bills, among others.

"I tried transferring Rs 1,100 to my Paytm wallet using the app on Monday night, but the money didn`t reflect in the account even though the transaction was completed succesfully," Anand, a Delhi University student, said.

"I then had to make another transaction to return the extra money, which again took four hours to show in my account. It was a big hassle," he added.

While all this happened in Delhi, banks in the neighbouring Noida remained closed on Tuesday, on account of Dr B R Ambedkar`s death anniversary.