Prime Minister Narendra Modi on Tuesday announced that 500 and 1,000 rupee  banknotes would be withdrawn from circulation at midnight to crack down on rampant corruption and counterfeit currency 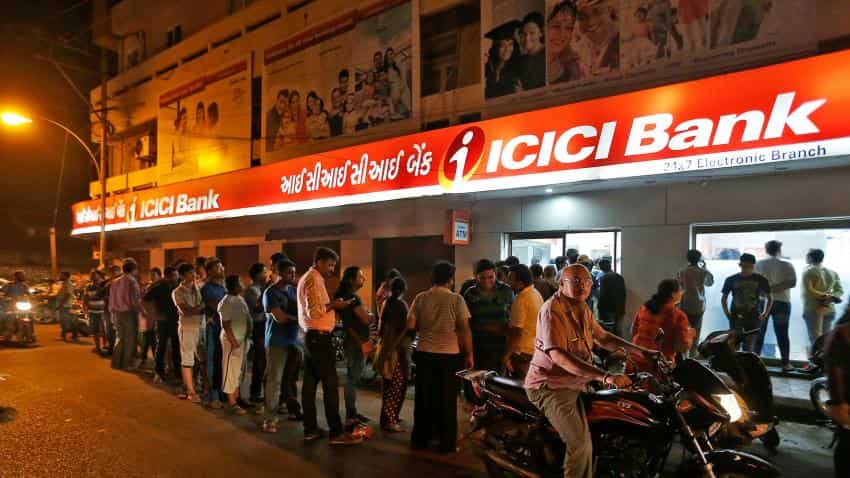 People wait to deposit and withdraw their money outside an ICICI Bank ATM in Rajkot. Image Source:Reuters
Written By: Reuters
RELATED NEWS

Prime Minister Narendra Modi on Tuesday announced that 500 and 1,000 rupee  banknotes would be withdrawn from circulation at midnight to crack down on rampant corruption and counterfeit currency.

The surprise move was designed to bring billions of dollars worth of cash in unaccounted wealth into the mainstream economy, as well as hit the finances of militants who target India and are suspected of using fake 500 rupee notes to fund operations.

"Black money and corruption are the biggest obstacles in eradicating poverty," Modi said in a hastily convened address to the nation after a cabinet meeting.

Nearly 40% of India`s economy is driven by small and medium-sized enterprises that largely run on cash transactions. Economists said the move could impact these businesses, and in turn have a knock-on effect on economic growth.

There was concern among members of the public about changing larger denomination banknotes for new ones once they expired.

Around a dozen people lined up to use an ICICI cash deposit machine in suburban Mumbai soon after the announcement, trying to deposit bundles of 500 and 1,000 rupee notes.

The machine stopped working after 10 minutes. Only two customers managed to deposit their money, and a security guard informed the rest that the cash dispenser has reached its limit and would not accept any more.

Delhi taxi driver Anu Choudhury said his boss called to say he should not accept 500 or 1,000 rupee notes from customers.

"This is not a good step for business. The prime minister did not think about people like us."

A report by Washington-based think-tank Global Financial Integrity estimated that India lost $344 billion in illicit fund outflows between 2002 and 2011.

The finance ministry said India would introduce new banknotes of Rs 500 and Rs 2,000  from November 10. The old notes can be deposited in banks and post offices from November 10 to December 30. All cash machines will be closed on Wednesday and Thursday.

The head of the Reserve Bank of India (RBI), Urjit Patel, said he saw no impact on liquidity in the wholesale market and that the bank had ramped up production of the new series of notes over the last few months.

Modi said militants operating against India were using fake versions of the 500 rupee note, worth about $7.50 at current exchange rates.

"Terrorism is a frightening thing ... But have you ever thought about how these terrorists get their money? Enemies from across the border have run their operations using fake currency notes. This has been going on for years," Modi said.

India accuses its neighbour Pakistan of harbouring militants who have launched attacks on its troops, particularly in the disputed Himalayan region of Kashmir which both countries claim. Pakistan denies the accusations.

Some officials and experts said Tuesday`s move was the biggest in decades aimed at fighting graft.

"It is like a surgical strike on black money," said Revenue Secretary Hasmukh Adhia.

But the head of a state-run bank said it was not fully prepared for the change.

"This is news for us also. I am not aware how much stock we have in our chest. The Reserve Bank will have to provide us with required cash to meet the demand. The demand will be very high no doubt," said the bank chief, who did not want to be named as he was still awaiting details.

In the past five years, circulation of all currency notes grew 40%, compared with 30% growth in Asia`s third-largest economy.

The head of the country`s largest government-owned lender, State Bank of India (SBI), said she had just been advised about the government`s decision.

"We have handled demonetisation earlier and will do so again. Tomorrow banks will remain closed in order to withdraw these notes from counters and ATMs. We will strive to restock ATMs at the earliest and make them operational," said chairman Arundhati Bhattacharya.