Many showed resentment over the same issue and complained their demands were not met by the bankers, who feel that if they go by the RBI upper limit, they will be able to please only some of their customers -- while the queues outside keep getting longer. 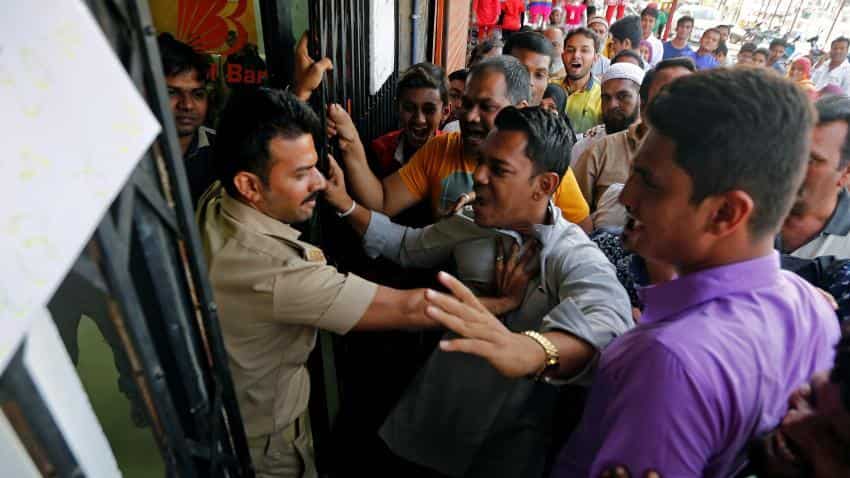 As salaries got credited to many bank accounts on Wednesday, more chaos was witnessed outside bank offices with a large number of people queuing up to withdraw their money.

The November 8 demonetisation announcement was followed by huge struggles for the people hit hard by the cash crunch.

The situation has surely gone worse with people now having to deal with total cash payments to domestic helps, drivers, grocery bills.

An IANS correspondent who went from bank to bank both in New Delhi and adjoining Noida found people queued up in bigger numbers to withdraw their salaries were annoyed by the rush and showed resentment about the banks setting their own arbitrary limits and rules for withdrawals.

"I have been standing in the queue for past two hours as I have to pay my maid and grocery bills in cash. I somehow managed to convince my landlord to accept the rent in cheque but I am bound to visit the bank for other payments," said Vishakha Sharma, a resident of Janakpuri in southwest Delhi.

"It is so humiliating that we have to stand in long queues and beg for our own money. I am sure, tomorrow (December 1) will be even worse as maximum number of people will receive salaries in their accounts," the 27-year-old said.

An MNC employee complained about banks not conforming to the rules about the withdrawal limit.

Many showed resentment over the same issue and complained their demands were not met by the bankers, who feel that if they go by the RBI upper limit, they will be able to please only some of their customers -- while the queues outside keep getting longer.

A resident of Mayur Vihar, Chirag was not allowed to deposit Rs 4,000 as he didn`t carry his identity card to the bank.

A heated argument took place between the branch manger and him as he kept arguing that according to the RBI guidelines there was no need to carry the identity proof to deposit less than Rs 50,000.

"I can`t deposit the cash as they are asking for a copy of the identity card, which I am not carrying. I also came to withdraw but they have run out of cash," the 36-year old Chirag said.

"This is obnoxious on part of the bank to be not entertaining its customers by going against the set norms."

A resident of Krishna Nagar, Rahul Chauhan received his salary on November 29 but was unable to withdraw. "I stood in the queue at 3 a.m. in the morning (on Thursday). By the time, my chance to enter the bank came, the bank ran out of cash."

"It is annoying that bankers were telling others to go back but entertaining the people that they know."

Surinder Kaur, who is in her 50s, also alleged that bankers are helping their friends and relatives and also complained about the abuse of the token system in banks.

"I have been coming to the bank for past three days. Turn-wise tokens are distributed to lady customers. They are told to come around 1 p.m. When we reach, they send us back saying that there is no cash left," she said.

"I am feeling frustrated with the mismanagement on part of the banks and also the government."