103 trains cancelled in Odisha, Andhra Pradesh, other states: All you need to know about Cyclone Fani

On Thursday alone, some 51 trains are cancelled, followed by 49 cancellation so far on Friday on which the cyclone is likely to struck and also create landfall in Odisha. 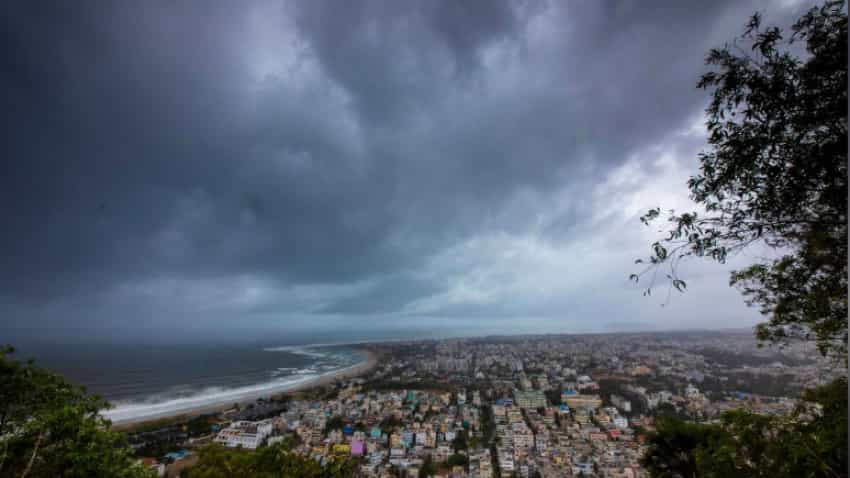 Clouds loom ahead of cyclone Fani in Visakhapatnam. Photo: Reuters

With cyclone Fani fast approaching the Odisha Coast, the East Coast Railways has been forced to cancel over 100 trains travelling to or from regions of Odisha. Andhra Pradesh and other states which are likely to get impact as well. For ensuring safety of citizens, tourists, the Railways have cancelled a total 103 trains between May 01 to May 03, 2019. On Thursday alone, some 51 trains are cancelled, followed by 49 cancellation so far on Friday on which the cyclone is likely to struck and also create landfall in Odisha. However, the special trains are operational, helping the evacuation of citizens and tourists. States like Assam, Bihar, Madhya Pradesh, Uttar Pradesh are seen to be affected from this cyclone.

Meanwhile, trains such as Bangalore to Guwahati and Visakhapatnam to Amritsar was diverted.

Further, continuing the evacuation process, special trains were operation. First one was from Puri which is already scheduled at around 12 noon. Followed by second train from Puri to Howrah at around 3 pm. Meanwhile, there is another train to Howrah scheduled at 6 pm. These trains will stop at Khurda Road, Bhubaneswar, Cuttack, Jajpur Keonjhar Road, Bhadrak, Baleswar and Kharagpur.

The national weather forecasting centre, India Meteorological Department has called Foni as ‘extremely severe cyclonic storm’. Latest update given by IMD shows that, Foni which is over Westcentral Bay of Bengal moved northnortheastwards with a speed of about 15 kmph in last 06 hours and lay centred at 0530 hrs IST of 2nd May, 2019 over Westcentral Bay of Bengal, near Latitude 15.9°N and Longitude 84.4°E, about 450 Km south-southwest of Puri (Odisha), 230 km south-southeast of Vishakhapatnam (Andhra Pradesh) and 650 km south-southwest of Digha (West Bengal).

IMD said, “It is very likely to move north-north eastwards and cross Odisha Coast between Gopalpur and Chandbali, around Puri during 3rd May afternoon with maximum sustained wind of speed 170-180 Kmph gusting to 200 Kmph.”

No significant change in maximum temperatures likely over most parts of the rest of the country during next 2-3 days.

This would not be the first cyclone to hit Odisha. Sadly, the state has been taking shocks of multiple cyclones since 1999. In fact, between 2013 to 2014, Cyclone Phailin, Cyclone Helen and Cyclone Hudhud has already impacted this state. Last one was in 2018, named as cyclone Titli which winds were 150 km per hour 93 mph.

According to BBC report, Indian officials say they have set up more than 850 shelters, which are thought to be able to hold almost one million people. Reportedly, the navy, the coast guard and the National Disaster Response Force have all been prepared for deployment.

Interestingly, the storm is also expected to move towards Bangladesh and Chittagong region by Saturday. Also, Cox Bazaar’s port city where thousands of Rohingya refugees stay in camps have also been alerted.

What is a cyclone?

A cyclone is a huge scale air mass which rotates around a strong center of low atmospheric pressure in meteorology. They are formed by inward spiraling winds which rotate about a zone of low pressure. The characterization of a cyclone, hurricane and typhoon are almost similar. The only difference is where the storm occurs. For instance, in Northwest Pacific, this storm would be called as typhoon, while cyclone comes in South Pacific and Indian Ocean and in the Atlantic and Northeast Pacific they are termed as hurricane.