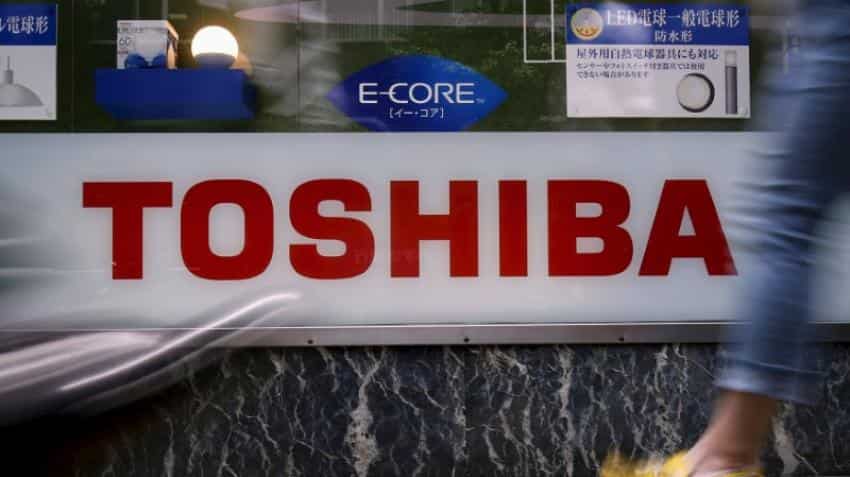 Pedestrians walk past a logo of Toshiba Corp outside an electronics retailer in Tokyo. Image Source: Reuters

A looming writedown at Japanese conglomerate Toshiba Corporation has wiped almost $5 billion off its value in two days and prompted a credit rating downgrade on Wednesday, as the company grapples to plug a potential multi-billion dollar hole.

It did not comment on whether that would wipe out its asset value and tip the company into negative net worth. Executives said it could take until February to pinpoint the exact impact.

Toshiba shares, however, took an immediate hit on Wednesday, falling 20% to hit the Tokyo exchange`s daily downward limit. That follows a 12% drop on Monday after initial warnings from the group.

Investors fretted that a blow to the group`s finances could even weaken its competitiveness in its core semiconductor business - specifically investment in 3D NAND, a new advanced type of flash memory - or result in firesales and dilutive share issues.

For the first time in seven years, the value of the group fell below that of tech rival Sharp.

Rating agency Standard & Poor`s downgraded Toshiba, already in junk territory, to B- from B, with a "negative" outlook. S&P said it expected shareholder equity to "drastically shrink" as a result of the writedown, eroding the group`s resilience, while expected higher working capital would burn more cash.

"Toshiba`s ability to enhance its shareholders` equity is likely to continue to be difficult for the foreseeable future," S&P said, adding it also saw "persistently tough business conditions".

Credit analysts at SMBC Nikko Securities said in a report that they saw three options as Toshiba deals with the imminent task of enhancing its capital base: making more profits faster, selling assets and increasing capital.

Only the middle option is likely in the short-term, however.

Toshiba is still burning cash despite a positive bottom line in the first half of the financial year and cannot raise more capital on the stock market while it remains on Tokyo`s watch list, where it has been since a 2015 accounting scandal.

"I expect Toshiba to start with asset sales, and then to issue preferred shares if asset sales are not enough. They will start with measures other than (the chip business) listing," one source close to the company said.

Toshiba has said it will consider all options to bolster its finances, even "the positioning" of its nuclear business which is centred around Westinghouse, a US firm bought in 2006.