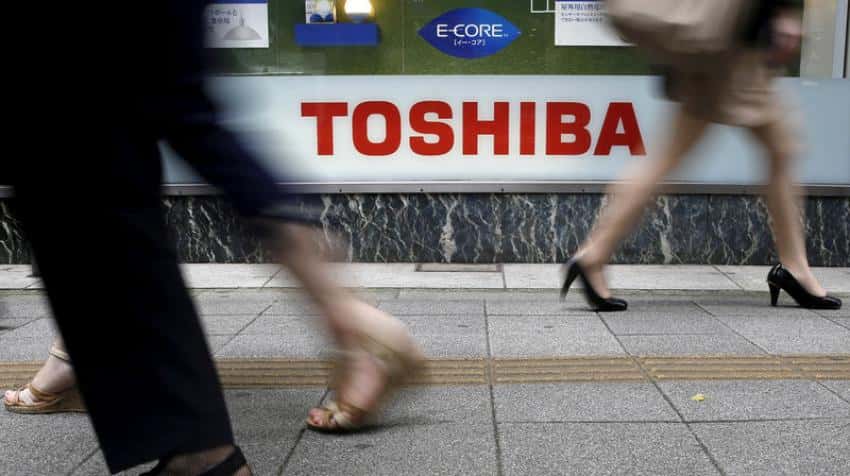 Pedestrians walk past a logo of Toshiba Corp outside an electronics retailer in Tokyo. Image Source: Reuters
Written By: Reuters
RELATED NEWS

Toshiba said in a statement on Thursday that the 45 unnamed shareholders were seeking compensation for damages caused by its "inappropriate accounting". It will take an unspecified provision to cover any eventual payout, Toshiba said.

The laptops-to-nuclear conglomerate has been sued by 15 groups and individuals since it first admitted to reporting inflated profits going back to 2008, including Japan's public pension fund. GPIF, the world's biggest pension fund, has been shifting into shares to attempt to boost returns.

Thursday's case, however, is the largest- the remaining suits are seeking a combined 15.3 billion yen in compensation.

Toshiba is still overcoming the reputational and share price hit of an investigation last year that found widespread accounting errors throughout its sprawling business, blaming a corporate culture in which employees found it difficult to question their superiors.

Tepco shareholders in 2012 sued the utility's executives for a record 5.5 trillion yen. That case, still ongoing, accused former Tepco directors of ignoring multiple warnings of a possible tsunami and of failing to prepare for a severe accident.

In 2008, five former executives of Janome Sewing Machine Co were ordered by a court to pay 58.3 billion yen compensation to the company, local media reported at the time, saying it was the biggest compensation pay out to date.