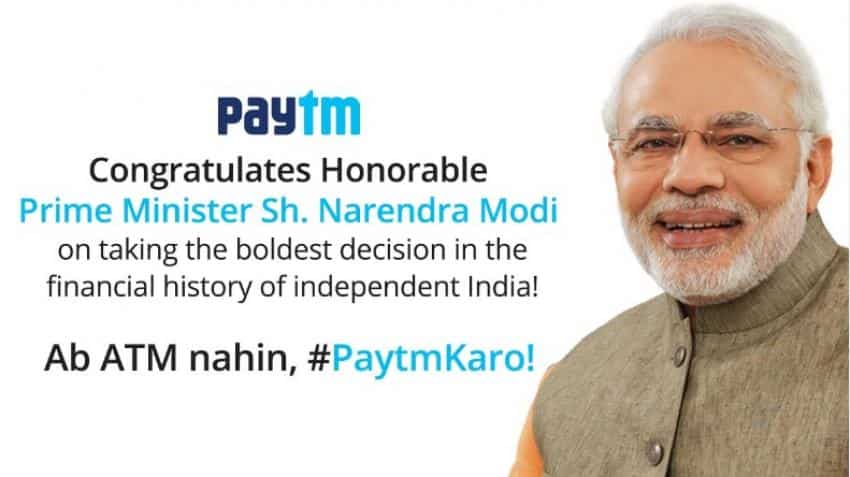 Mobile-wallet company Freecharge in a statement said that it saw a 12 times jump in its average wallet balance since last night. Image Source: Paytm company website

The demonetisation move by the government which left old Rs 500 and Rs 1,000 notes illegal tenders from midnight of November 8 made people switch preferences to e-wallets like Paytm and debit or credit card transactions.

Mobile-wallet company Freecharge in a statement said that it saw a 12 times jump in its average wallet balance since last night. It said that consumers are adding funds to their digital wallets following Modi government's decision to scrap some banknotes.

“This is the golden age to be a tech entrepreneur in India. Specially a FinTech one!” Paytm CEO, Vijay Shekhar said in a tweet after PM Modi’s historic announcement.

While financial technology startups and companies rejoiced at the thought of more payments through their portal, this would have no direct impact on cash held with the people currently.

However, more cash deposits in banks are expected over the next month.

“From the consumers' point of view, there is now a physical cost attached to keeping money out of the formal setup; so consumers will move money to banks. Debit card transactions are bound to increase. So this move has several positives for the economy; specifically fintech companies like ourselves will benefit a lot,”Co-founder of Fisdom.com said.

Over the span of the next 50 days starting November 10, people will be able to deposit their old currencies with banks and exchange new ones up till December 30.