With household penetration of two-wheelers increasing to reach a high, the growth in the industry is expected to decline over the last few years. 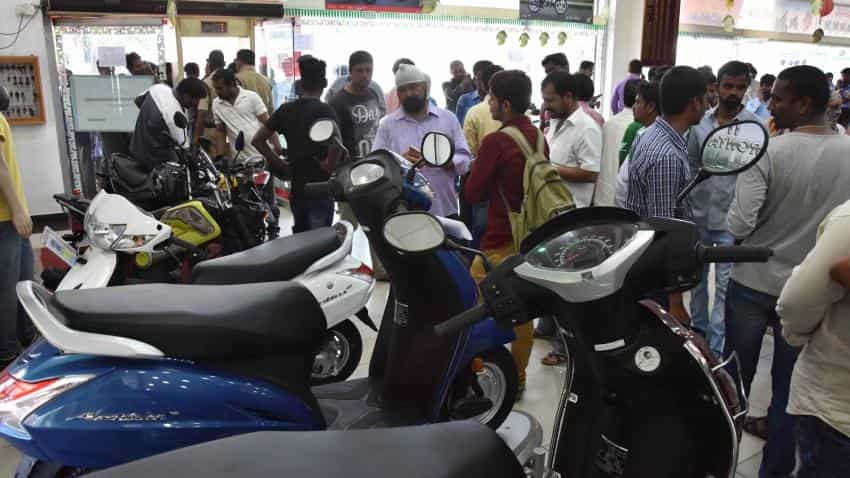 People at a showroom trying to buy a bike after the BS III ruling. Photo: IANS
Written By: ZeeBiz WebTeam
RELATED NEWS

The Indian two-wheeler industry should prepare for growth shock as it is expected to structurally decelerate to mid-single digits with the beginning of the maturity phase of the market. The domestic industry volume compound annual growth rate (CAGR) at 5.5% over FY12-17 is significantly lower than 12% over FY02-12, according to a SBICap Securities report.

The reason the two-wheeler industry will see a deceleration in growth is due to the high household penetration level currently. 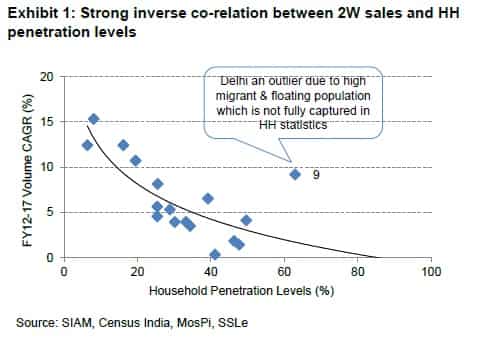 They further said that nationally two-wheeler household penetration stood at about 42% in FY17 and is expected to approach about 50% by FY18-end, thus the high risk of growth slowing down to mid-single digits.

The report explains that with more number of households having two-wheelers, the new bike sales will reduce especially in rural areas. 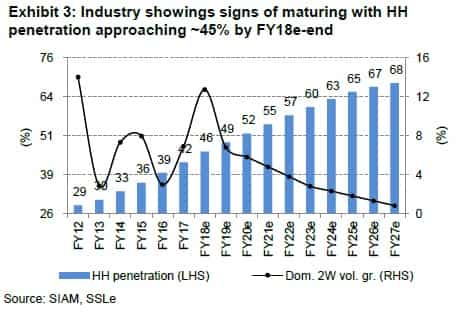 While two-wheeler growth has pushed the household penetration levels above 40%, top eight states (about 55% of industry volumes) have registered a meagre 2.7% compound annual growth rate (CAGR).

Apart from this, growth over FY12-17 has primarily been driven by the rest of India (ROI) Hindi speaking states with 9.5% CAGR.

The key insight here is that the ROI's penetration levels, now at 32% (about 36% by FY18-end) are close to levels where volumes in top-8 states started tapering off. The analysts expect two-wheeler volumes in mid to low-single digits going ahead.

However, replacement demand will increase significantly as people will look for spare parts to replace old or damaged two-wheeler parts. This the report says will drive the industry growth in the next two-three years.

“Replacement cycle if it shortens (currently assume 8 years), can support the industry growth to higher-single digits over next 2-3 years,” said the analysts. 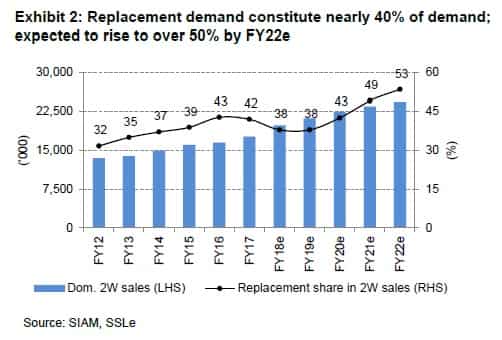 Share of replacement demand is expected to rise from about 30% levels in FY12 to about 40% by FY18.

“With the industry growth maturing, we expect over 50% of volumes to comprise of replacement demand by FY22,” said the analysts.

The report estimates 12.7% growth in the two-wheeler volumes during the FY18 period.

This growth in FY18 is expected largely a one-off cyclical rebound led by rural recovery on the back of 2 years of good monsoon and low-base due to demonetisation in FY17.

Rural consumption had been impacted for the last three years owning to combination of two consecutive monsoon failures (2014 and 2015) and lower growth in minimum support prices for crops.

The report also says that the two-wheeler growth will decline over the next few years as same-store sales growth has stalled and incremental volumes are largely due to the expansion of network of dealerships.

This too is expected to reduce out in the next couple of years once network expansion is largely through.

“Our channel checks paint a fairly gloomy picture with a sharp deceleration in new bookings growth across markets. While investors may brush this off as anecdotal, we suspect this is more structural,” the analysts said.

It further added that sharp deceleration in same-store sales growth is yet to reflect in Pan-India wholesale dispatches of 250-500cc motorcycle segment given run-off in the order book and low channel inventory supported with network expansion.

Compared to over 50% volume CAGR over last 5 years in this category, the report expects the whole volume growth to decline to sub-15% post FY18, once the network expansion is largely through.

However, scooter growth is expected to be robust and could be nearly half of the two-wheeler market by 2022, said the report.

“We expect the pace of adoption of scooters to accelerate even further, with about 80% share of incremental volumes over FY17-22,” said the analysts.