While the performance was subdued, it is expect a likely pick-up in volumes going ahead. 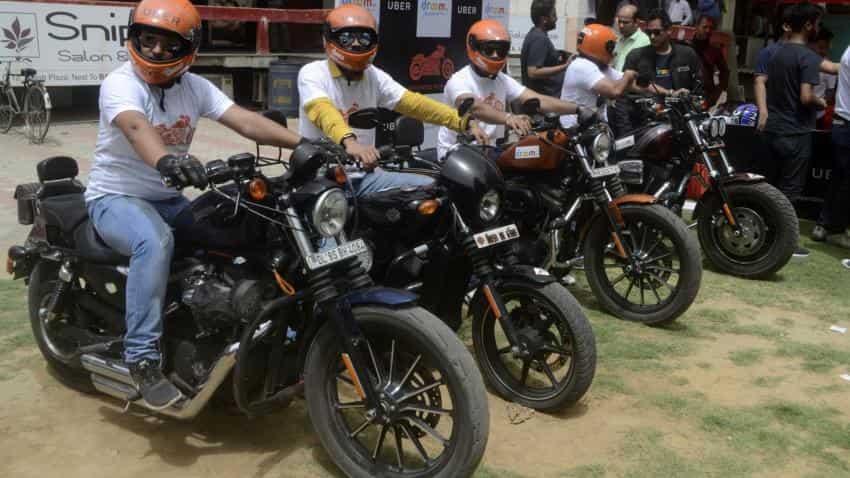 Bikers participate in a campaign launched by Droom and Uber to give free rides of Super bikes at Qutub Plaza in Gurugram on April 7, 2017. Photo: IANS
Written By: ZeeBiz WebTeam
RELATED NEWS

While car sales in India started the financial year on a good note with a good hike in sales, the two-wheeler segment continues to feel the pain post demonetisation. Sales of most of two-wheeler companies were either flat or saw a decline in April. This comes as a disappointment as the automobile segment was expected to see a push in sales from the wedding season, despite the rise in prices due to BS-IV implementation.

Bajaj Auto on Wednesday reported a marginal 1% increase in motorcycle sales as it grew to 2,93,932 units in April this year from 2,91,898 units last month.

TVS Motor posted a 4% growth in domestic sales during the month as it sold 2,05,522 units from 1,97,629 units in the corresponding period last year.

However, there were some two-wheeler companies that managed to do a little better in terms of their sales. For instance, Yamaha Motor registered a 8% growth in domestic sales as it sold 68,827 units during the month as compared to 63,927 units during the corresponding period last year.

Honda Motorcycle and Scooter India (HMSI) achieved a record sales growth for a single month as it posted a 34% growth in April. It sold 5.7 lakh two-wheelers in April 2017.

Royal Enfield too posted a 25% growth with 60,142 units in April from 48,197 unit in the corresponding period last year.

While some companies have shown positive sales it seem that two-wheeler sales seem to be still on the recovery road post demonetisation.

“Re-stocking of inventory at dealer level and volume led incentives to compensate dealers for the fire sale discounts led to OEMs like HMSI/TVS/Hero MotoCorp reporting higher volumes in the current month,” said a Systematix report.

In March two-wheeler sales saw a marginal growth of 0.3% to sell 14.7 lakh units in March, according to data from the Society of Indian Automobile Manufacturers (SIAM). This has been the same for a few month before that too. For instance, in February 2017 too it saw a decline by 0.01%. In January, two-wheeler sales saw a 7.39% decline.

However, there is some good news for two-wheeler companies going forward. While the performance was subdued, it is expect a likely pick-up in volumes going ahead. This is due to the growth in Kharif production and expected good rabi crop, which will fuel rural demand.

“While the performance was subdued, we expect likely pick-up in volumes going ahead. Backed by good growth in Kharif production, expected good rabi crop, we expect rural demand to improve,” said a Kotok Securities report.

Furthermore, the Indian Meteorological Department (IMD) has predicted a normal monsoon this year and that should push the rural demand further.

If the monsoon's are normal even the small hike in prices of two-wheelers such as the one announced by Hero MotorCorp of a hike of Rs 500 to Rs 2,200 across all models will not have a major impact on the sales.