Ashok Leyland expects the these three segments to contribute 50% of its revenues, up from 30% currently 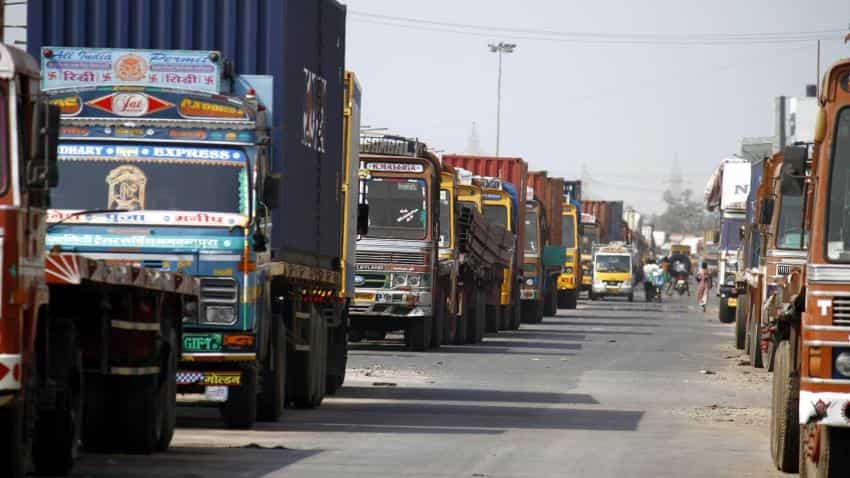 Trucks lined up on a road in Chennai. Photo: IANS
Written By: ZeeBiz WebTeam
RELATED NEWS

Commercial vehicles manufacturer Ashok Leyland aims to become a leader in both the Medium and Heavy Commercial Vehicles (MHCV) and light commercial vehicles (LCV) segments in the next 3-5 years. One of the main reasons for this is the company has launched its Bharat Stage (BS) IV trucks using inhouse technology and can convert BS-III vehicles to BS-IV at a much lower cost than competitors.

Ashok Leyland's new technology named 'iEGR' which incurs an additional cost of only Rs 20,000 in converting a BS-III engine to BS-IV. While competitors use SCR technology that costs Rs 60,000-80,000 for the same, according to a Philip Capital report.

The technology has less electronic components, hence it is more suited to Indian roads with lower maintenance. Besides this, it has 10% higher fuel efficiency in comparison with its peers.

However, it is the defence, after-market and exports segments of the company which it expects to be the key growth drivers.

Ashok Leyland expects the these three segments to contribute 50% of its revenues, up from 30% currently, according to a Philip Capital report.

Its order book in this segment has been rising. The company sees its defence revenues growing by 10 times in the next five years.

Apart from defence vehicles, it sees its exports and after-market sales segments where Ashok Leyland sees robust growth. “It has been seeing strong traction in exports and now dominates 60% share (up from 20%) in the Middle East; it is a leader in Ukraine. To strengthen its export footprint, Ashok Leyland will set up a plant in Kenya and the Ivory Coast over the next two years,” said the report.

After‐market sales contributed 9‐10% of Ashok Leyland’s total sales, compared to over 25% contribution in the case of global OEMs like Scania and Paccar. This is mainly because component players of the company directly sell OE parts in the replacement market.

“To address this, Ashok Leyland has replaced few component providers and has launched parts with the name Ashok Leyland embedded on it. Management sees the revenue contribution from these new focus segments (defence, exports, after‐market) to reach 50% of revenues (from 30%) within the next five years,” said the analysts.