The government has acknowledged that the disruption would last weeks because of delays in note printing and technical problems with ATM machines, but Modi has made a plea for patience until Dec. 30. The government said it could not have printed new notes or recalibrated cash machines in advance for fear of the move leaking out. 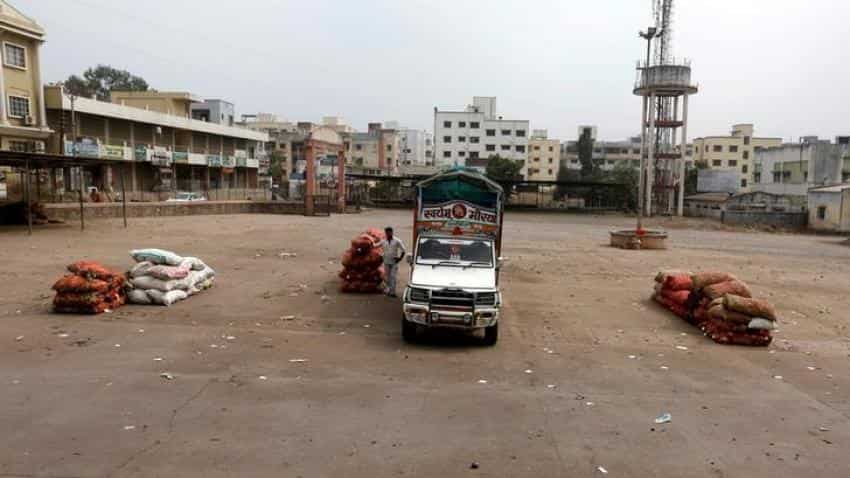 A vegetable seller waits for customers at a wholesale market in Manchar village. Pic: Reuters
Written By: Reuters
RELATED NEWS

Like millions of Indians fed up with corruption and counterfeiting, Vimal Somani cheered Prime Minister Narendra Modi`s shock move to replace all high-value banknotes. Two weeks on, his business is being hammered by the ensuing cash crunch.

Sales at Somani`s aluminium foil maker, Rockdude Impex, have fallen by roughly a quarter in the past week, and the cash shortage that followed the "demonetisation" drive has left his supply chain in tatters: his trucks are stranded with no money for fuel, workers won`t load goods for free, and distributors can`t pay up.

Modi`s move on Nov. 8 was aimed at cracking down on corruption and flushing out funds stashed away in India`s "black economy". But the cancellation of 500 and 1,000 rupee notes ($7.3 and $14.7), more than 80 percent of currency in circulation, threatens to push Asia`s third-largest economy into a liquidity crisis.

Consumer spending makes up 56 percent of India`s $2 trillion economy. But with just the small stock of smaller denomination notes available and a struggle to get hold of new bills, consumers are holding back.

The government has acknowledged that the disruption would last weeks because of delays in note printing and technical problems with ATM machines, but Modi has made a plea for patience until Dec. 30. The government said it could not have printed new notes or recalibrated cash machines in advance for fear of the move leaking out.

Meanwhile, supply chains at small, medium and even larger companies are breaking down, underlining just how much corporate India - not just the shadow economy - relies on hard cash.

"The entire supply chain has broken," said Somani, who employs 150 people across India from his base outside Mumbai.

Problems at Rockdude go from its network of suppliers to its 1,500 distributors and 150 stockists. Its sales team, spread from Delhi to Nagaland in the east and all the way to the south, is rapidly running short of cash to promote a planned new product, even for the rickshaw rides they use to travel.

Revenues have frozen, Somani says, but fixed costs continue, including wages. These are paid online, but his staff cannot get access without being given time off to queue at the bank.

"We are cutting production," he added. "If this goes on for two more months, then it will hit us very badly."

An executive at a mid-sized hair oil manufacturer, a beauty staple in India, said sales had crumpled as consumers simply stopped buying shampoos and lotions. Wholesale markets, which operate in cash, are shut. Distributors have no cash.

"We are planning to extend some discounts to the distributors so that they at least replenish the amount of stocks they are selling, instead of not buying from us at all," he said.

"We are cutting production every day," he added.

Like many of the businessmen interviewed by Reuters, he declined to be named, given the sensitivity of the issue.

In the year to March 2017, the cash crunch is estimated to pull down India`s gross domestic product (GDP) growth from last year`s 7.6 percent by as much as 4.1 percentage points. Brokerage Ambit Capital says it does not rule out a contraction in the October-December quarter.

Corporate operating profits are tipped to fall by as much as 40 percent in the current quarter.

People ranging from taxi drivers and street hawkers to big consumer goods firms have seen their earnings plummet by as much as 80 percent in the first week of the swap alone, according to some analysts` estimates.

Those relying on informal, cash-based channels are, unsurprisingly, worst hit. Greengrocer Ranveer Singh, who regularly borrows money to run his shop in New Delhi, sold vegetables on credit to regular customers in the first two days after the cash crackdown, but has been forced to shut up shop.

"I don`t have cash to refill stocks," said Singh, who used to make about $15 a day before the crackdown began.

"If it remains like this for two more weeks, my family might have to go without food."

But even for more sophisticated firms, paying employees is a major challenge, and not just in the construction and building materials sectors, which still pay contractors in cash.

As most Indians do not have bank accounts, most are paid in cash, though reliable statistics are hard to come by.

With the government changing rules for currency withdrawals and exchange almost every day, Somani and others are struggling.

Chandubhai Kothia, head of chemicals company Shree Ganesh Chemicals in Gujarat, with an annual turnover of 1 billion rupees, said a newly imposed 50,000 rupee cash withdrawal limit per week for some businesses that came in as part of the measures was simply not enough.

"The payment of wages to workers and transport are a problem," he said.

While Modi has promised the cash situation would become normal by year-end, Saumitra Chaudhuri, a former economic adviser to the government, estimates it will take six months to replace the stock of cancelled bills.

Some analysts are already reviewing their estimate of company earnings for the rest of the year.

Brokerage Motilal Oswal warned this week that its forecast of a revival in corporate earnings in the second half of the fiscal year 2016/17 was now in jeopardy, with autos, retail, consumer goods, cement, telecom and non-banking financial companies likely to see downgrades.

India`s vast services sector, which accounts for two-thirds of GDP, is worst hit.

Credit Suisse estimates more than 90 percent of consumer purchases are made in cash as few Indians have bank cards and infrastructure for online transactions is poor.

In Gurgaon`s Cyber Hub, a corporate leisure centre, several eateries reported a crash in their card swiping machines, compelling them to decline customers who didn`t have sufficient smaller denomination bills.

In rural areas, where cash is totally dominant, the situation is worse.

In the wheat-growing states, sales of seeds and fertiliser have plunged halfway through the sowing season as farmers told Reuters they had run out of cash.

As the crunch continues, more are beginning to ask whether the government could have done more to ease the impact.

"The Prime Minister to my mind has done an income tax raid in every house in the country," said Abhishek Saraf, joint managing director of SquareFoot, a flooring-maker in Mumbai.