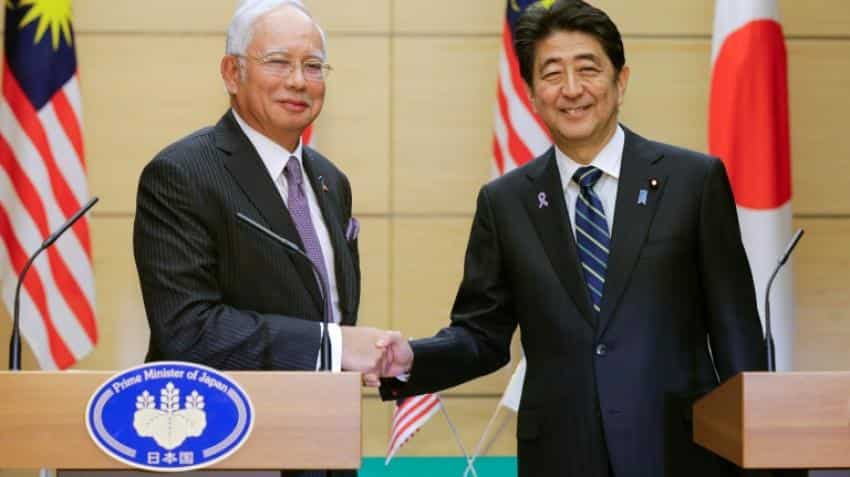 The plea from Najib came a day before Abe is set to meet Trump in New York and as Australian Prime Minister Malcolm Turnbull also reiterated to Japan`s leader the economic and strategic importance of the TPP. Image Source: AFP

The plea from Najib came a day before Abe is set to meet Trump in New York and as Australian Prime Minister Malcolm Turnbull also reiterated to Japan`s leader the economic and strategic importance of the Trans-Pacific Partnership (TPP).

Asian leaders are scrambling to save the TPP, championed by US President Barack Obama but which Trump has vowed to scrap, claiming that the 12-nation deal would harm the US economy and costs jobs.

Najib and Abe, after their summit in Tokyo, told reporters that their nations are moving ahead toward ratifying the TPP.

The group accounts for an enormous 40 percent of the global economy, and was envisaged as a counterweight to Asian giant China`s expanding economic influence.

"We hope that the TPP agreement will come into force," Najib told reporters with Abe by his side.

"That is why I told Prime Minister Abe that his meeting... with President-elect Donald Trump is very much awaited by all TPP countries."

Najib added that he hopes the "strategic importance of the TPP will be recognised by the incoming administration as well as by all participating countries".

Abe`s office announced that he separately spoke with Australia`s Turnbull by phone to discuss the TPP.

Turnbull highlighted his shared resolve with Japan to work with the incoming US administration, Abe`s office said in a statement.

"TPP`s significance goes beyond setting economic rules for the Asia-Pacific region, but also has strategic significance of securing peace and stability of the region by countries that share basic values," Abe told Turnbull.

Abe and other leaders of TPP countries will caucus on the sidelines of the annual Asia-Pacific Economic Cooperation summit in Lima, Peru that begins this week.

Global economy week ahead: Investors all ears as Trump set to break silence