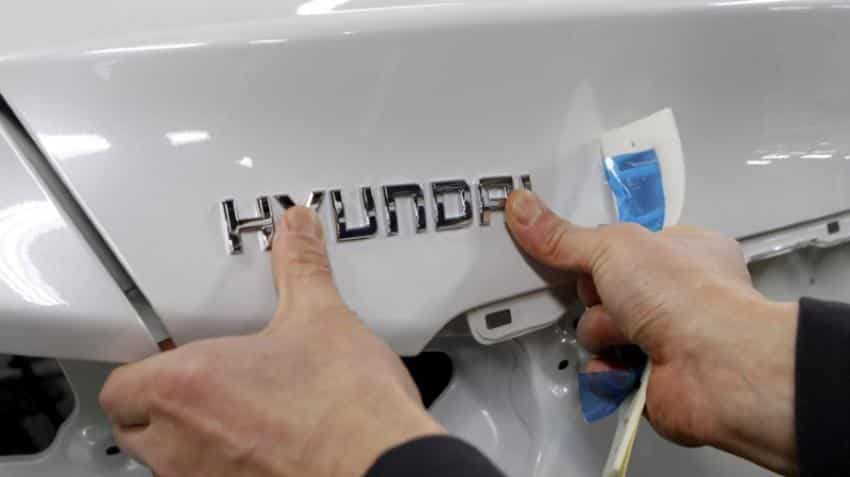 A worker fixes the Hyundai logo on a vehicle at a plant of Hyundai Motor in Asan, south of Seoul. Image Source: Reuters
Written By: Reuters
RELATED NEWS

The Hyundai Motor Group said it plans to boost U.S. investment by 50 percent to $3.1 billion over five years and may build a new U.S. factory - the latest auto firm to announce fresh investment after threats from President-elect Donald Trump to tax imports.

Trump has threatened to slap a 35 percent tax on vehicles imported from Mexico, criticising foreign automakers from BMW to Toyota Motor Corp for building vehicles in Mexico for the U.S. market.

Chung Jin-haeng, president of the group, which encompasses Hyundai Motor Co and Kia Motors Corp, denied that the plan was driven by pressure from Trump but said the group hopes for improved demand for cars under the new U.S. president as he has pledged to create jobs.

"We have to be committed to the U.S. market - a strategically important market which can make or break our global success," he told reporters in Seoul.

The South Korean group plans to spend the $3.1 billion to retool existing factories in the United States and boost research on self-driving cars, artificial intelligence and other future technologies, Chung said.

He also said the group is considering a new U.S. factory to build high-margin, high-demand models such as a U.S.-specific sport utility vehicle and a Genesis premium vehicle.

"We are studying the plan diligently," he said, adding that whether or not to build a new plant will depend on demand.

Chung said Hyundai Motor, which does not have a Mexico factory, will start production at Kia`s Mexico factory this year as previously planned.

But he said he is "agonizing" over the Mexico factory, adding that the planned annual capacity of 400,000 is subject to change.