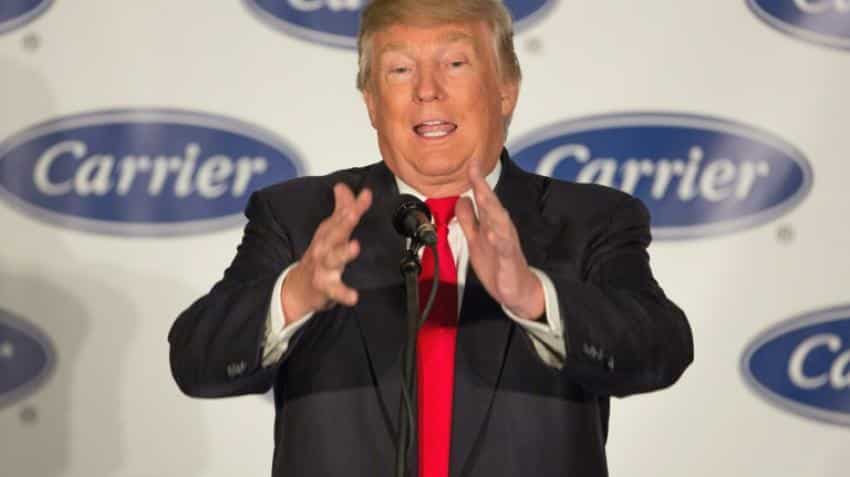 With a series of tweets, he has singled out several major companies and demanded they bring factories back to the United States to boost manufacturing and employment. Image Source: AFP
Written By: AFP
RELATED NEWS

Donald Trump has not yet taken office, but he is already boasting that his election has restored confidence in the American economy, and saved jobs.

With a series of tweets, he has singled out several major companies and demanded they bring factories back to the United States to boost manufacturing and employment.

American carmaker Ford canceled construction of a plant in Mexico to instead invest in the United States and create 700 jobs, citing a "vote of confidence" in the economic agenda of the incoming president.

In December, it was the American manufacturer of air conditioners Carrier that backed off a planned transfer of 1,000 jobs to the Mexico, after a deal with Trump -- and for $7 million in tax cuts.

His election also created euphoria in US stock markets. The Dow Jones index has set multiple records since the November 8 election, coming close to the 20,000-point milestone and proving wrong the many who predicted a market crash if Trump were elected.

"Before there was any chance that he would be elected, no one paid much attention to his program, which is what companies want: a lot of deregulation and tax cuts," analyst Aparna Mathur, of the conservative think tank American Enterprise Institute, told AFP.

Several economic indicators also reflect this renewed sense of optimism. A December Philadelphia Fed survey showed the proportion of companies confident in the future doubled in one month, while household confidence reached its highest level in 15 years.

"Thank you Donald!" the president-elect said in a self-congratulatory tweet.

His unprecedented strategy of tweeting his complaints against major companies -- including General Motors, Ford and Toyota -- and issuing threats if they don`t invest in the United States, could prove to be worthwhile.

"In a way, he`s still continuing his campaign by reaching out to companies and giving the sense that he really cares about jobs," said Mathur, who nonetheless is convinced Trump will have to switch to a more conventional approach once he is installed in the White House.

CEOs also seem to be getting the message.

"We are pragmatic, we will adapt to any situation," said the chief of the Renault-Nissan alliance, Carlos Ghosn, speaking at the Consumer Electronics Show in Las Vegas.

Toyota chief Akio Toyoda said, "If you look over the long term, we are oriented in the same direction," according to a Wall Street Journal article published shortly before Trump launched his tweet against the company, again for building a plant in Mexico.

But the optimism of the American business community is also explained by a political fact unrelated to Trump`s personality: for the first time since 2010, the White House and both chambers of Congress will be under the control of one party.

"There`s a general sense that more things will be able to get done because the US government is now unified behind the Republican Party," Mark Zandi, chief economist at Moody`s, told AFP.

President Barack Obama, a Democrat, constantly clashed with the Republican-controlled Congress, causing repeated budget crises and preventing any reform of corporate taxation, stalemates for which each blamed the other.

According to experts, however, it will take much more to convert this honeymoon of optimism into a durable phenomenon.

Trump has promised a vast infrastructure spending plan, but the details are fuzzy and could burden public finances. In December, the US Federal Reserve pointed to the "considerable uncertainty" about the program of the next administration.

Finally, the trade war that Trump threatened to wage against China and Mexico could change the mood of American multinationals that depend heavily on their overseas activities, especially as the dollar strengthens and makes their exports more expensive.

"We have to see what he has in mind exactly, and what he actually executes on," Zandi said.

Jared Bernstein, former White House counselor under Obama, is more definitive, and predicts a tough road ahead if Trump implements his program of deregulation and tax cuts.

"People without economic amnesia -- and there aren`t enough of them according to my humble opinion -- will remember that it was a very large tax cut in tandem with financial market deregulation that got us in this mess in the first place," Bernstein told AFP, referring to the 2008 financial crisis.