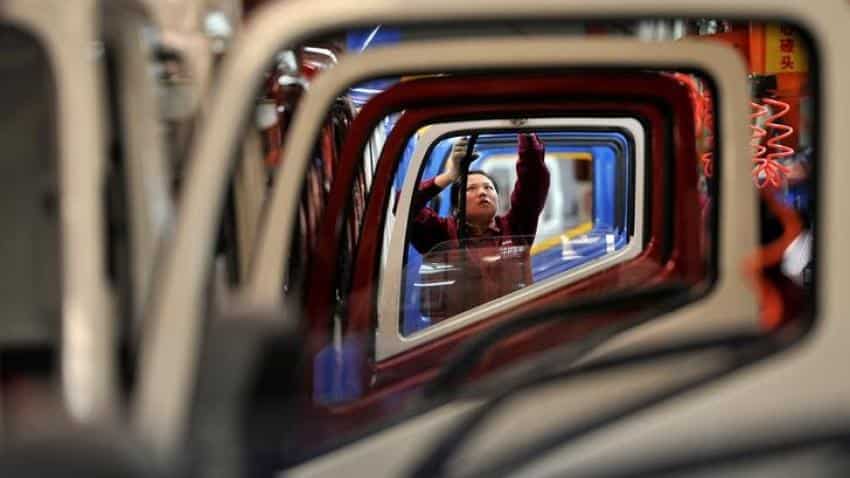 A worker installs rubber onto the windows of the doors along a production line at a truck factory of Anhui Jianghuai Automobile Co. Ltd in Hefei. Photo: Reuters
Written By: Reuters
RELATED NEWS

Asian stocks climbed on Wednesday, capping a fifth consecutive month of gains, as data showed China's factory activity grew at a steady clip this month, bucking expectations of a slowdown.

"The market remains positive and the favourable PMI data reinforces the trend, though investors should be careful of chasing markets higher as liquidity conditions can change quickly," said Alex Wong, a fund manager at Ample Capital Ltd in Hong Kong, with about $130 million under management.

Activity in China`s manufacturing sector grew at the same pace in May as in April, with a headline reading of 51.2%, official data showed, in a reassuring sign the world`s second-biggest economy is not losing too much steam after a solid first quarter performance.

Analysts had seen a slight slowing to 51.0%.

Growth in China`s steel industry rebounded to the strongest level in a year, supported by an increase in new orders, according to an industry survey, buoying prices of iron ore and steel rebar futures in Shanghai.

In a further vote of confidence, Moody`s Investors Services said the improving outlook for global growth in 2017 appeared sustainable as some of the biggest risks to the developed economies seem to have subsided.

Despite signs of improvement in the global economy, investors are wary of chasing markets higher with stock trading volumes on the mainland and Hong Kong trending lower in recent days, signalling diminishing investor confidence.

On a price-to-earnings basis, Hong Kong is now valued in line with its 20-year average while the broader Asia-ex Japan market is above its long term average, indicating Asian stocks aren`t cheap any more after a 17 % rise this year.

In currency markets, the pound fell briefly to $1.2791, near a one-month low of $1.2775 touched on Friday before recovering slightly. It also slipped to 0.8738 pound per euro, near Friday`s eight-week low of 0.8750. New constituency-by-constituency modelling by YouGov showed the Conservative Party might lose 20 of the 330 seats it holds while the opposition Labour Party could gain nearly 30 seats, The Times said.

"The UK election chances will likely see the pound go through a bad case of yo-yo syndrome in the weeks ahead," said Stephen Innnes, senior trader at OANDA.

The news came after a string of opinion polls showed a narrowing lead for May`s Conservatives, shaking investors` confidence that May would easily win a majority in a national election on June 8 and potentially fuelling market uncertainty.

The dollar held near two-week lows against the safe-haven yen as investors turned cautious amid political worries in Europe as well as weaker stock and commodity markets after a long U.S. holiday weekend.

The greenback`s weakness was also accentuated after the U.S. Treasury yields resumed their downward trend after a brief spike earlier this month. Ten-year yields were trading at 2.21 % compared to 2.41 %, two weeks ago.

In commodities, oil prices remained soft, as concerns lingered about whether the extension of output cuts by OPEC and other producing countries will be enough to support prices.