Chinese industrial firms have reported 14% rise in profit for April this year but has slowed down as compared to March month on back of falling prices of finished products, raw material costs and slower profit growth of industries like steel, autos and chemicals. 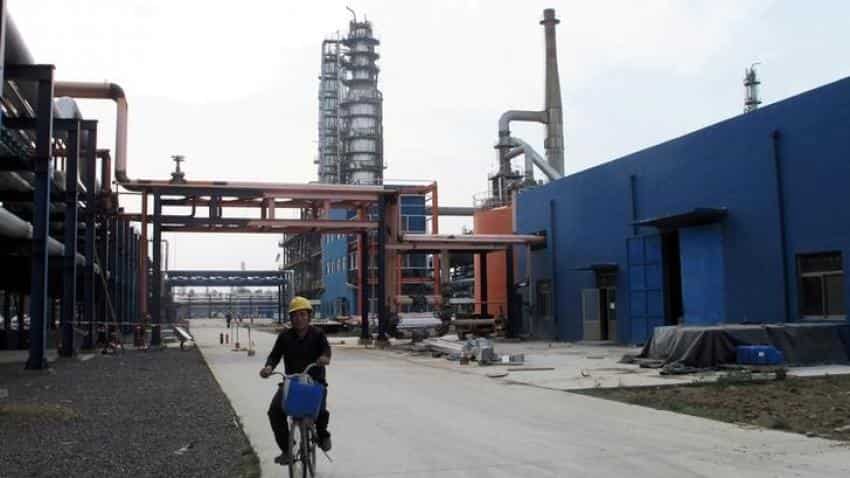 An employee rides a bike on a road near refinery plants of Chambroad Petrochemicals, in Boxing. Image Source: Reuters
Written By: Reuters
RELATED NEWS

Profits earned by Chinese industrial firms rose 14.0% in April from a year earlier, official data showed on Saturday, slowing from March`s pace and adding to concerns that the world`s second-largest economy may be losing steam.

Profits had surged 23.8% in March over the same month of last year. For the first fourth months of the year, profits reached 2.28 trillion yuan, up 24.4% from the same period last year and compared with a growth of 28.3% in the first quarter.

After a roaring start to the year, industrial earnings had been expected to soften in April as prices of iron ore, steel and other commodities fell sharply, and as growth in factory output, investment and retail sales tapered off.

A building boom, fuelled by a government infrastructure spree and a heated housing market, has boosted demand and prices for materials from steel to cement, giving China`s long ailing "smokestack" industries more cashflow to chip away at a mountain of debt.

The slowdown in industrial profits can be attributed to falling prices of finished products and raw material costs, as well as slower profit growth in industries like steel, autos and chemicals, He said.

If raw material purchasing prices outpace the price of finished factory goods, this will cause industrial costs to rise, particularly for downstream industries, He said, adding that another issue that requires close monitoring is whether financing costs increase for companies.

Moody`s Investors Service downgraded China`s credit ratings on Wednesday for the first time in nearly 30 years, saying it expects the financial strength of the economy to erode in coming years as growth slows and debt continues to rise.

After expanding by a stronger-than-expected 6.9% in the first quarter, China`s economic growth is widely expected to cool over the rest of the year as the impact of earlier stimulus begins to fade and as borrowing costs rise in response to a crackdown on riskier forms of financing.

But, barring any major shocks, most analysts think the economy has enough momentum to hit Beijing`s 6.5% full-year growth target.

"We are now less pessimistic about short-term growth than we were just two months ago," economists at Nomura said in a note on May 25.

Nomura, which is maintaining its forecast of 6.7% gross domestic product (GDP) growth for 2017 and 6.2% for 2018, still believes property investment will slow as authorities take steps to cool heated prices, but now believes the decline will be more moderate and take longer than it originally expected.

In addition, the government is expected to keep economic and financial conditions largely stable heading into a key political leadership reshuffle later this year.

Liabilities of industrial firms rose 6.7% year-on-year as of end-April, according to the statistics bureau.

The data includes companies with annual revenues of more than 20 million yuan from their main operations.