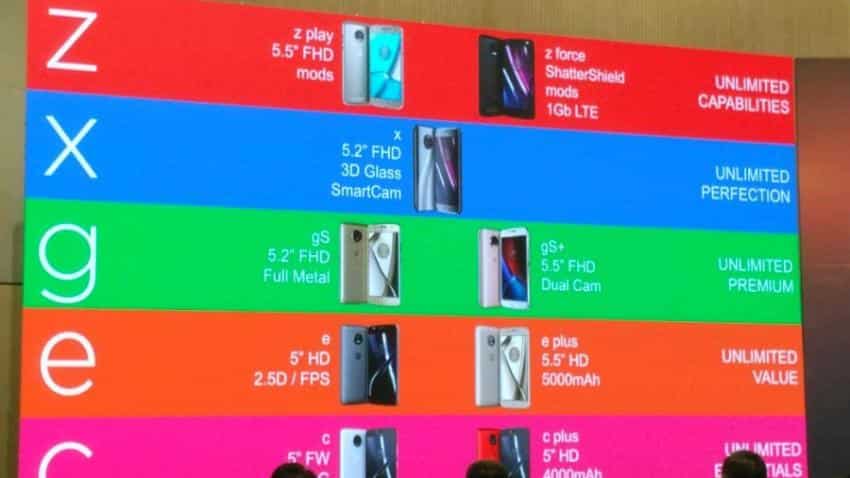 A list of Motorola smartphones about to be launched. Photo: Twitter
Written By: ZeeBiz WebTeam
RELATED NEWS

Moto C Plus to go on sale on Flipkart at 12 pm today; here's pricing, specs & more

Motorola has reportedly sent out press invites for an event which they are hosting on June 25. Lenovo, Motorola's parent company, is expected to launch either the Moto X4 or the Moto Z2 at the event. This launch will take place in New York City. At the same time, the company is also gearing to launch the Moto E4 Plus in India July 12.

While the Moto X4 is expected to be priced somewhere between the Moto G and the Moto Z series, the Moto Z2 will succeed the Moto Z and may be a tone up version of the Moto Z2 Play launched recenty.

In terms of the specifications the Moto X4 comes with a 5.2 inch screen display, while the Moto Z2 may come with a 5.5 inch Quad HD display.

The Moto X4 is expected to give competition to some of the top smartphones such as the OnePlus 5, HTC U11, Samsung Galaxy S8 and S8+.

The Moto X will come with a 64GB internal storage which can be expanded via microSD card. There are still no details on the storage space of the Moto Z2.

The Moto Z2, on the other hand, will have a 12 megapixel rear camera and a 5 megapixel front camera.

Both will include Android 7.1.1 Nougat operating system. And both the Moto X4 and Moto Z2 are expected to come with a 4GB RAM.

While it has not been announced when these two smartphones will be launched in India, but if anything is to go by like with the Moto C, C Plus, Moto Z2 Plus, the smartphones can be expected to launched soon in the Indian market.

Moto C Plus to go on sale on Flipkart at 12 pm today; here's pricing, specs & more