A slide from an internal presentation of Motorola shows that the company plans to launch smartphones from the C series to the Z series. 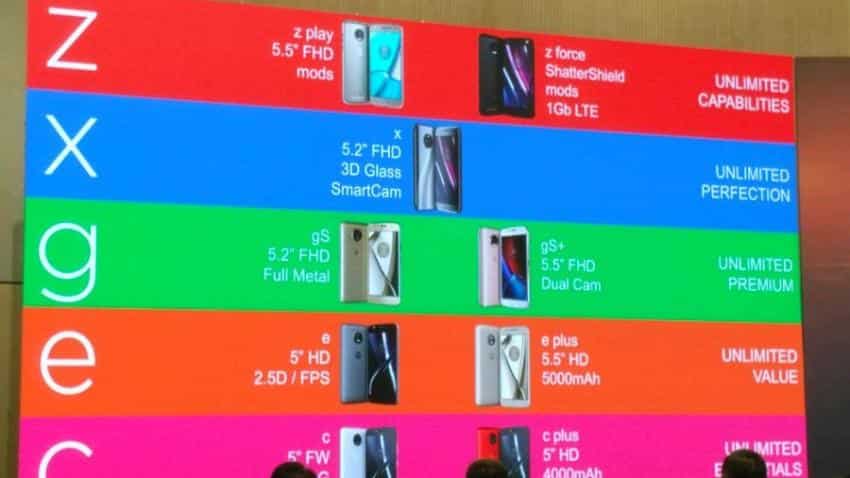 Motorola which launched the Moto G5, G5 Plus recently, has a massive line-up of smartphones they are expected to launch in 2017. Giving a glimpse into which smartphones they will launch, a leaked photo of an internal presentation of the company by mobile reporter Evan Blass showed that Motorola is working on an entry level C series and updated versions of E series and Z series.

While there were details regarding certain specifications of the new smartphones, there was however no information on the pricing of each of these phones or when they could be launched.

ALSO READ: Motorola offers BuyBack Guarantee on Moto G5 Plus ahead of launch

Motorola will launch a new version of the Z series as the company's flagship line-up. It launched the Moto Z last year. The 2017 Moto Z series is expected the Moto Z Play and Moto Z Force and is being shown as a smartphone with 'Unlimited Capabilities'. It will have a 5.5 inch full HD display along with Moto Mods.

The Z2 Force will have a shattershield display, Moto Mods support and 1GB LTE chipset. The Moto Z new series is pitched as smartphone with 'Unlimited Capabilities'.

Motorola is expected to bring back the Moto X with Moto X4 tagged as “Unlimited Perfection”. The smartphone will have a Full HD display with 3D glass and SmartCam. The Moto X 2017 series smartphone could be priced slightly higher than the current G-series phones.

While Motorola has already launched the Moto G5 and Moto G5 Plus in its G series, it is expected to launch two more phones in this range this year.

ALSO READ: Should you buy: Moto G5 Plus 32 GB on Flipkart; check out price, specifications

Finally, Motorola is expected to roll out the Moto C series phones this year which is tagged as 'Unlimited Essentials' and is expected to be the company's entry level Android smartphone.