Motorola will be available in India across all online and offline platforms from June 15. It is however having a pre-booking period from June 8 - 14 in which has several offers. 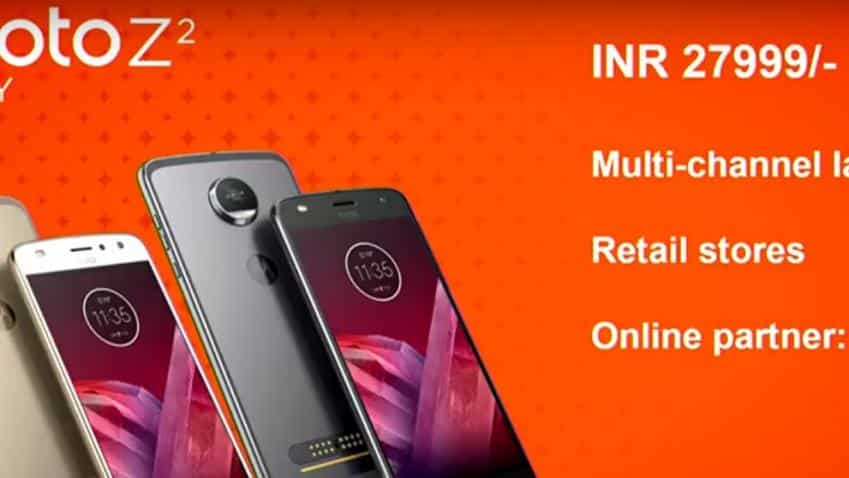 Motorola launched its latest smartphone the Moto Z2 Play in India priced at Rs 27,999. It will be available across multiple retail platforms and online on Flipkart.

The pre-booking offer is between June 8-14. It will be available from June 15. There will also be 50% off on Moto Mods during the pre-booking.

The smartphone which was unveiled last week is now coming to India just seven days after the global launch. Pre-bookings for the Moto Z2 Plus will begin from Thursday itself. Also people will 100GB of 4G data on Reliance Jio for free.

The pre-booking lets customers pay Rs 2,000 in advance and then pay the rest of the amount over 10 months with 0% interest. The company is also offering the Moto Armor pack which include protective accessories for the smartphone. There are also offers on Moto Mods.

In terms of specifications the Moto Z2 Play has Android 7.1.1 Nougat and has a 5.5 inch full-HD Super AMOLED display. It has Corning Gorilla Glass 3 protection.

The smartphone is powered by a 2.2GHz Snapdragon 626 octa-core processor.

The Moto Z2 Play sports a 12 megapixel rear camera with a 1.4 micron pixel sensor and an aperture of f/1.7. The front camera has 5 megapixels with an f/2.2 aperture, wide-angle lense with a dual-LED CCT flash.

It comes with a 3000mAh battery, which is lower than the 3510mAh battery it had in the earlier Moto Z Play. Lenovo however claims that the new and more efficient chipset will compensate for the loss.

The Moto Z2 Play has a TurboPower charger that provides 50% charge in just 30 minutes and can deliver up to 30 hours of mixed usage.

The Moto Z2 Play is water repellent with nano-coating and is only 5.99m thick. It smartphone is supported by Moto Mods and will support the old Moto Mods as well. It also launched new Moto Mods which include a Moto Power Pack that has 2200mAh battery, which brings around 16 hours of more power.

There is also one Mod which has 3490mAh additional battery and supports 30W TurboPower which can charge up to 50% in just 20 minutes.

Motorola also launched the Moto GamePad Mod which will work with all games and supports physical controllers. Besides this, there is a Mod launched which is a Wireless Charging Shell.