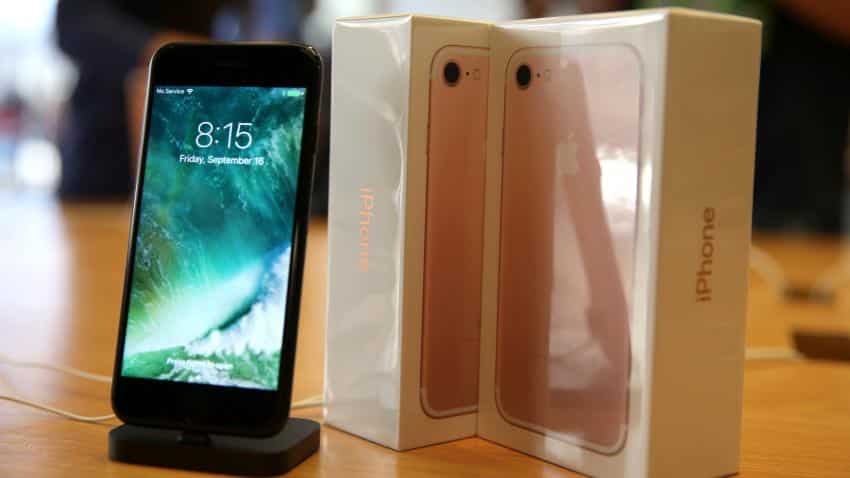 An Apple iPhone 7 on display in a store. Photo: Reuters
Written By: ZeeBiz WebTeam
RELATED NEWS

Apple has introduced its latest version of its operating systems for the iPhone, Mac, Apple Watch and Apple TV. Updates of the iOS 10.3, macOS 10.12.4, watchOS 3.2 and tvOS 10.2 have now been rolled out by the company. The updates are now available for download on compatible Apple devices. Even Apple users can check for the same on iTunes.

For iPhone users the most significant additional feature on the iOS 10.3 is the 'Find My AirPods' feature. This lets users find their missing AirPods using the app. It shows a map of where the user's AirPods are at any given time, given that they are connected to the iPhone. If it is not connected to the iPod it will show the last location of the AirPods when they were connected. Users can also play an alarm on the AirPods so that they can be located easily.

The iOS 10.3 has a new dynamic app icon as well and support for thread view in Mail. Siri also gets support for scheduling rides using ride booking apps, monitor car fuel level and turn on lights with select automaker apps.

The iOS 10.3 for iPhone also allows users to watch movies rented from iTunes across multiple devices. There is also improvements including new shortcuts in the status bar, curated playlists in Apple Music and support for UpNext option in Apple Music's Now Playing tab. UpNext is the Apple File System and replaces the current HFS+ file system in iOS devices to bring about storage and encryption improvements.

The updated Apple watchOS 3.2 has made improvements on Siri that now enables it to work with third-party apps such as WhatsApp, Lyft for people to make a call or book a ride using Apple Watch. There is also another unique feature called the Theater Mode button which keeps the Watch's screen dark even if the user raises their wrist.

For Mac users Apple has the macOS 10.12.4 which has a new Night Shift mode which enables them to switch the screen to warmer colours at night.

The tvOS 10.2 allows users to rent a movie on an Apple device and watch it on another.