Ola and Uber attached drivers may go on strike in Mumbai on February 28 to press for their demands on steady decline in their incomes, increase in penalties and a cut on incentive policies of these two taxi-hailing app-based companies. 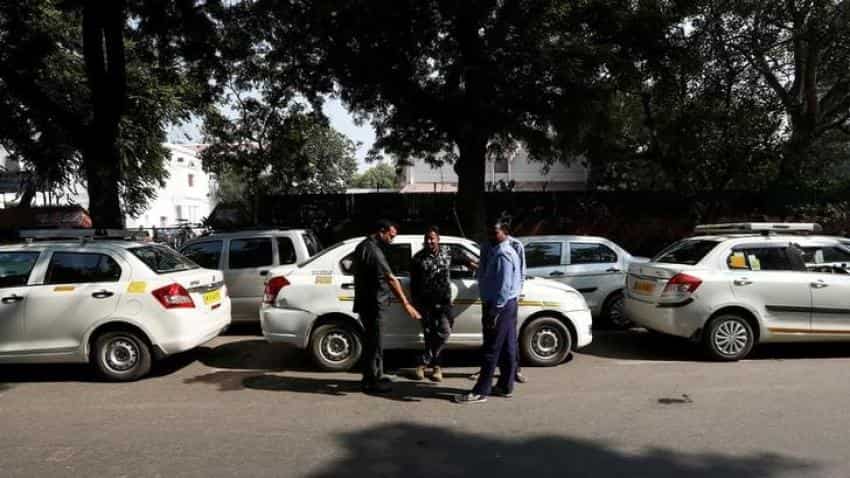 As part of the protest, cabbies are planning to park at least 500 to 1,000 taxis outside the offices of Ola and Uber in Mumbai from February 28. Representational Image. Image Source: Reuters
Written By: ZeeBiz WebTeam
RELATED NEWS

1. As part of the protest, cabbies are planning to park at least 500 to 1,000 taxis outside the offices of Ola and Uber in Mumbai  from February 28 this year

2. Cabbies to hold strike due to steady decline in their incomes, increase in penalties and a cut on incentive policies of Ola and Uber

3. According to cabbies, Ola and Uber have started unethical and unfair trade practices, which have forced them to hold protest to press their demands

After staging protests in the national capital and Southern metro cities of India, cab drivers attached to taxi-hailing apps Ola and Uber, are now planning to go on protest in Mumbai this week, The Hindustan Times reported.

The cabbies are going on strike due to steady decline in their incomes, increase in penalties and a cut on incentive policies of app-based taxi aggregators Ola and Uber, cited The Hindustan Times on Monday.

Delhi and several Southern metro cities such as Bengaluru and Hyderabad have already faced such protests.

The upcoming agitation by the Ola and Uber drivers may result in rise in fares of these two taxi hailing companies.

According to the news report, after an informal meeting at Bandra-Kurla Complex on Sunday, the cabbies threatened the agitation against the companies.

The group of 200-300 drivers met to plan further course of action and a series of meetings in the next two days.

The report further said that as part of the protest, they are planning to park at least 500 to 1,000 taxis outside the offices of Ola and Uber, from February 28. They are also planning to go on strike if their demands are ignored by these companies.

The cabbies have decided to go on strike because Ola and Uber have now started unethical and unfair trade practices.

“Until three months back, the business model benefited everyone — the company, the drivers and the customers as well. But the companies started unethical and unfair trade practices, forcing us to take this step,” the news report said quoting a driver from Andheri, as saying.

According to the cabbies, who work in the driver-partner model, the companies are not safeguarding the assurance of a minimum daily booking and instead, divert most of the bookings to the company-owned cabs, it said.

The news report further citing the drivers also alleged that these taxi-hailing app-based companies have slapped Driver Denied Duty (DDD) penalties on them.

The steps adopted by these companies have affected their daily earnings, it said quoting another taxi driver as stating.

“We took loans to purchase the vehicles, trusting the assured business guarantee scheme that the companies initiated. Now, in wake of the new norms, the earnings have gone down making it difficult for us to pay the equated monthly installment (EMI),” the report said quoting the driver as saying.

A taxi union leader said that a section of over 500 drivers, whose vehicles were attached with Ola and Uber, have come together to press for their demands.

India's financial capital Mumbai has over 30,000 app-based taxis and the Maharashtra state government is in the process of bringing in new rules to regulate app based aggregators with the City Taxi Rules 2016.

According to the news report, Ola did not respond to queries on the issue while Uber refuted the driver’s claim about unethical practices.

“At Uber, we are committed to the highest ethical business standards and indulge in fair play. There is no preferential treatment for anyone,” said an Uber spokesperson to the newspaper.