Many economists say that the move will result in a slowing down of the economy in the near term. 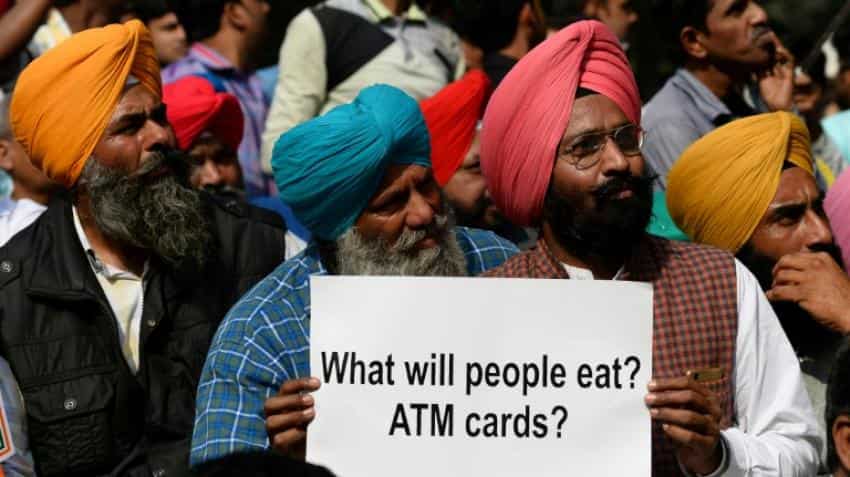 A protester holding a card during a demonstration against the government's move to demonetisation old Rs 500, Rs 1,000 notes. Photo: AFP
Written By: AFP
RELATED NEWS

Prime Minister Narendra Modi's shock decision to scrap most of India's currency was hailed by some as a masterstroke against endemic corruption, but signs are emerging that it may hit the economy hard.

The sweeping overnight abolition of all high-value notes was supposed to bring billions in so-called "black", or undeclared, money back into the formal system.

But experts are warning the ensuing cash crunch could have a dramatic impact on growth just as the economy was beginning to take flight.

India runs largely on cash, but that is still in short supply, nearly three weeks after Modi`s shock announcement that 86 percent of its currency would be withdrawn from circulation.

Many ATMs remain empty and banks have been forced to ration cash as they face huge queues. Many people have still not been able to change their old currency.

That has left farmers unable to sow their crops and produce markets all but empty, while small traders like the tea sellers that dot India's streets say business has fallen off a cliff.

On Thursday former prime minister Manmohan Singh, a respected economist, told parliament the surprise decision would shave at least two percentage points off growth and slammed the government for what he said was shoddy implementation.

The rupee shake-up had been a "a monumental management failure" and "a case of organised loot and legalised plunder", said Singh, who belongs to the opposition Congress party.

More worrying still for the prime minister, experts including former US Treasury Secretary Larry Summers have questioned whether the scheme will even achieve its core aim of cutting tax evasion.

"Without new measures to combat corruption, we doubt that this currency reform will have lasting benefits," said Summers in a blog post denouncing the move.

"Corruption will continue albeit with slightly different arrangements."

Most experts agree it is too early to say what the impact will be on India's gross domestic product, which expanded 7.1% year-on-year in the three months from April-June, outpacing Asian rival China.

"The fall-out of the policy is unfolding now. So the next month will be critical to determine what people finally think of this move," political analyst Devdan Chaudhuri told AFP.

But ratings agency Fitch has already said it is revising down its India growth forecast for the fourth quarter of the calendar year, saying it would "almost certainly" be weak.

Yes Bank chief economist Shubhada Rao said it would take until the middle of next year for growth to recover.

"We are seeing disruption to growth in the near term, but once liquidity is restored, demand will return. By the second quarter of the next financial year, GDP will return to normalcy," he told AFP.

Experts say the move was a contributing factor to the rupee hitting an all-time low of 68.8625 rupees against the dollar on Thursday, although the main reason was an expected US rate rise next month.

The uncertainty has contributed to huge outflows of foreign capital from India, although N. S. Venkatesh, a currency specialist at IDBI Bank, told AFP this could reverse in time.

"Foreign investors are waiting to see how the demonetisation drive will play out in the near term. If it stabilises, all the cash could come back to the Indian economy," he said.

Modi, who won a landslide election victory in 2014 on a promise to tackle endemic corruption, has strongly defended his move, which still enjoys widespread popular support.

Many poor Indians who have patiently spent hours queueing at banks say they back the decision if it forces the rich to pay their taxes.

In a speech on Friday the prime minister urged ordinary Indians to stick with him, promising that "the new notes will come" and saying the scheme would root out corruption and tax evasion.

"This black trade is eating away our country like termites," he said, comparing tax evasion to the "exploitation of the poor".