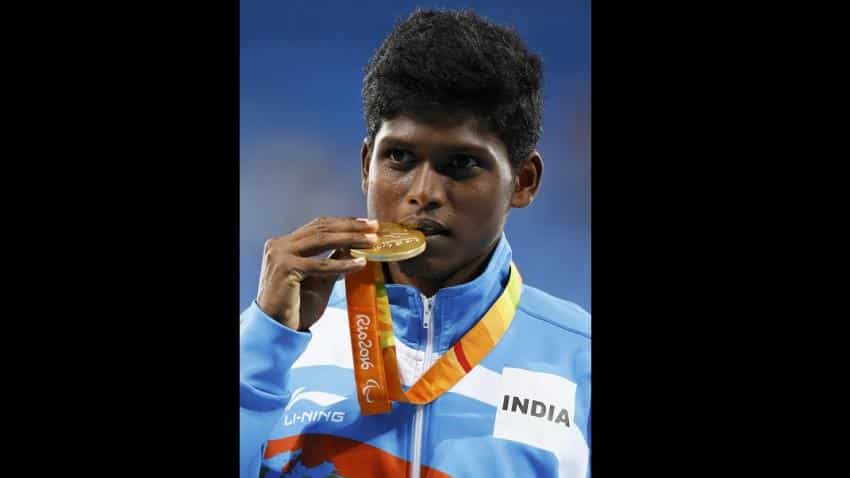 Thangavelu is the first Indian high jumper to win a gold medal at the Paralympics and his gold is India’s third in Paralympics’ history. Image Source: Reuters

Mariyappan Thangavelu created history by becoming the first Indian to win a gold medal in the men’s high jump event at the 2016 Paralympics, while his compatriot Varun Singh Bhati took the bronze medal in the same event on Friday.

This cash reward is now on par with the cash prize announced for gold medal winners of the Rio Olympics by the Sports Ministry in August.

"I was delighted to learn that you have won a gold medal in the Paralympics currently being held in Rio De Janeiro, Brazil. I understand that this is the first time an Indian has won a gold medal in the high jump event in the Paralympics. By leaping over a height of 1.89 metres, you have leapt into history and done both the nation and the state of Tamil Nadu proud," Jayalalithaa wrote in an open letter.

"Your achievement, overcoming several obstacles and hurdles, will inspire more and more children and youth to overcome adversities and to participate and strive for greater achievements. Kindly accept my heartiest congratulations on behalf of the people of Tamil Nadu on your splendid achievement," she added.

Thangavelu is the first Indian high jumper to win a gold medal at the Paralympics and his gold is India’s third in Paralympics’ history.

The two victories marked the opening of the medal's kitty for India in the 2016 Paralympic Games.

21-year old Varun Singh Bhati, who came in third jumped 1.86 m. The winners were congratulated by President Pranab Mukherjee as well as Prime Minister Narendra Modi who stated that the athletes' success was a matter of pride for the nation and they will have a positive influence on sportspersons in India.

Rio Paralympics 2016: Thangavelu, Bhati get cash rewards from govt on their victories