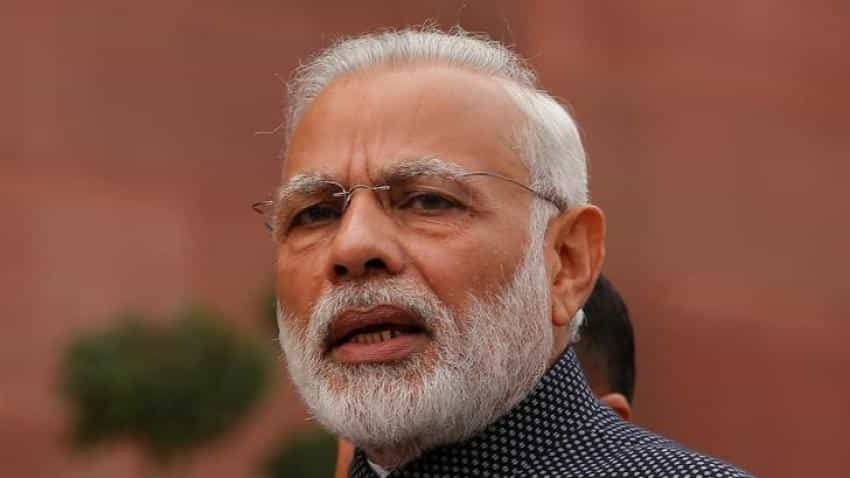 India's Prime Minister Modi speaks to the media inside the parliament premises on the first day of the winter session in New Delhi. Image Source: Reuters
Written By: Reuters
RELATED NEWS

Prime Minister Narendra Modi on Saturday defended his crackdown on the cash economy that has left businesses, farmers and families suffering, saying it was necessary to keep inflation in check and ensure basic amenities for all.

Modi`s decision last month to scrap Rs 500 and Rs 1,000 banknotes as part of a crackdown on tax dodgers and counterfeiters has caused a currency crunch in a country where most people are paid in cash and buy what they need with cash.

With a small stock of smaller notes available and new bills of Rs 500 and Rs 2,000 in short supply, Indians are being forced to stand in queues outside banks and cash machines to change their old notes.

Addressing his party`s election campaign rally in the state of Uttar Pradesh (UP), Modi said, "Please support me in curing the disease that has been afflicting this country for the last 70 years."

"I have put you all in a queue. But this is the last queue to end all the queues."

While Modi has been praised for his intentions, he is facing flak from political opponents as well as prominent economists such as Amartya Sen and Paul Krugman for sucking 86% of the currency out of circulation virtually overnight.

Nobel laureate Krugman on Friday said Modi`s decision was "highly disruptive" and would result in "significant" temporary cost for the economy without producing major gains in the long-run.

Officials expect some illicit cash never to be returned and to expire worthless, while other money that is deposited will remain in the banking system. The government`s goal is to encourage the use of cashless forms of payment, a challenge for most Indians who live and work in the informal economy.

The fallout from the decision is widely expected to impact economic growth this quarter and for several quarters to follow. Opinions, however, vary on the scale of the damage.

Modi called for patience until December 30, by when he has promised the cash situation would stabilise, and urged people to shift to electronic transactions.

"I will not let your sacrifice and hardship go waste," he said.