How to double farmers' income: These farmers just did it! This is how

The aim the 'Baareh Mahine Hariyali' initiative is to multiply farm income through crop diversification and value addition, productivity enhancement, raising cropping intensity, income diversification -- all being carried out round the year, besides boosting market linkages. 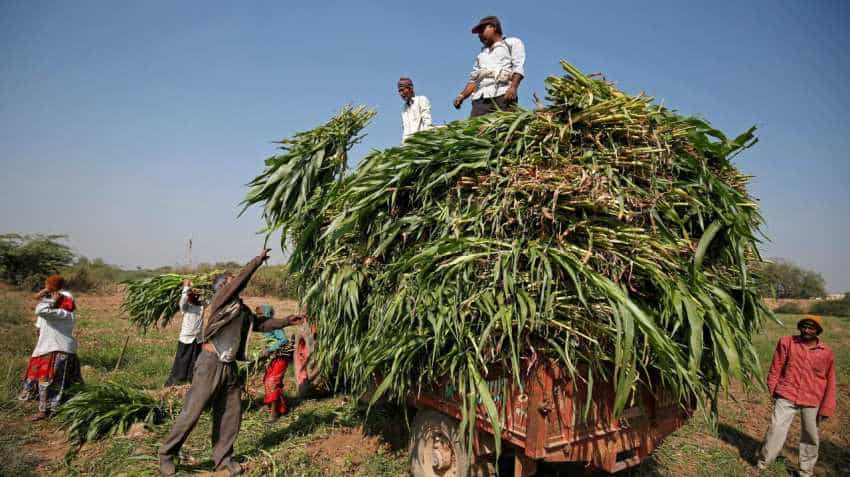 As the Narendra Modi-led government has been stressing innovations and generation of revenue through allied-farm activities to achieve the ambitious goal of doubling farmers` income by 2022, some farmers, who are a part of ITC Limited's 'Baareh Mahine Hariyali' initiative, said their income has doubled with adoption of smart techniques and maximum utilisation of agricultural land.

The aim the 'Baareh Mahine Hariyali' initiative is to multiply farm income through crop diversification and value addition, productivity enhancement, raising cropping intensity, income diversification -- all being carried out round the year, besides boosting market linkages.

The income enhancement initiative has been introduced in four districts of Uttar Pradesh -- Ghazipur, Chandoli, Allahabad and Hathras -- and Bihar`s Munger districts on pilot basis, where it has demonstrated encouraging results within a short span of time, as per the the Cigarette- FMCG- Hospitality conglomerate.

There is "a skepticism" among farmers over crop remuneration and they can maximize their income through four broad ways, said S Sivakumar, Group Head of Agri & IT Business, ITC.

"We have seen farmers get low prices for their produce but retail prices are high. Then there are middlemen. We have to see how to plough back more money from consumers to farmers," he said, stressing the need to adopt demand-driven value chain approach.

"Also, we need to increase productivity with minimizing the cost of cultivation. It can be achieved through interactions with farmers instead of one-way broadcast."

Moreover, increasing the number of crops from the same field during one agriculture year and income from allied-farm and non-farm activities can help farmers in getting more income, he said.

Jewari village is among the villages in Chandoli, where farmers claimed to have witnessed an increase in their income by taking up innovative approaches and utilising their land round the year under the initiative.

Lalji Yadav, who owns 20-acres of land, said his income has doubled owing to decrease in the cost of cultivation besides earning revenue from different sources.

"Earlier, it would take 150 days for rice cultivation. However, we used new varieties, farm inputs and paddy transplanters provided by ITC, which not only reduced the crop cycle to 130 days but lowered the cost of cultivation by Rs4,000," Yadav said.

"Similarly, the cost of cultivation of wheat has gone down by 16 per cent with introduction of new varieties and use of zero till machine."

Creation of more space due to reduced crop cycles thus allowed these farmers to take additional crop such as moong, adding further to their income, said Ramashankar Tiwari, who cultivates 10 acres in nearby Alimoha village.

With the assistance of the Indian Council of Agricultural Research (ICAR) and other agencies, the ITC has made available rice varieties such as PS-5, PS-6, PR-123, PR 124 and wheat varieties such as PBW-550, Kedar, HD 2967 to these farmers as per the local conditions.

"Our approach is different for different areas. What worked in Punjab may not work in Uttar Pradesh. So we localised our research and innovative techniques as per the need of a particular area," said Sachin Sharma, General Manager at ITC`s Agri Business Division.

The initiative is an extension of ITC`s e-Choupal programme, which links the company with farmers via internet for procurement of agricultural commodities serving 35,000 villages across the country.

Rajnikant Rai, Chief Executive of ITC`s Agri Business Division, said about 2,00,000 farmers have been covered under the initiative so far and as many as 30,000 have reported doubling of their income.

The farmers, who implemented the initiative partially, have reported 30-75 per cent income rise.

"We have been doing branding of `Baareh Mahine Hariyali` from past 2-3 years. It has impacted over two lakh farmers so far. We intend to bring 10 lakh farmers under its cover in next two years," Rai said.

"As the initiative shows positive results, more farmers would adopt it."