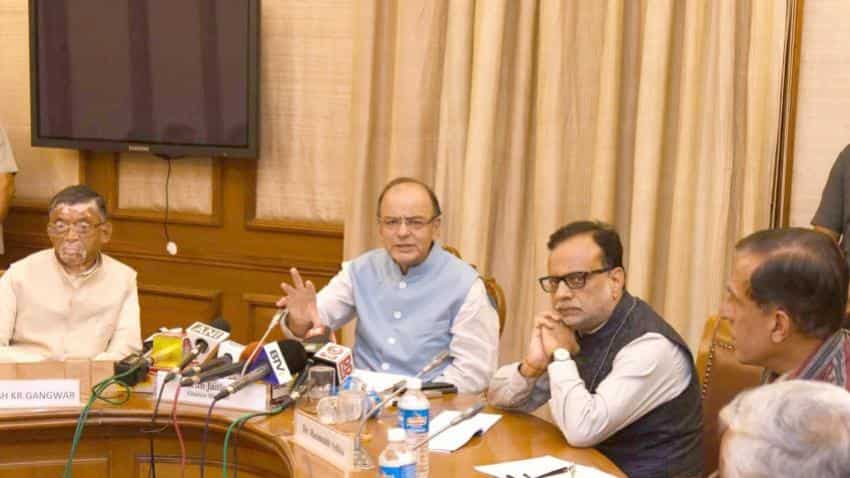 Union Minister for Finance and Corporate Affairs Arun Jaitley briefs the media about the outcome of the 2nd meeting of the GST Council in New Delhi on September 30, 2016. Image Source: IANS/PIB

The sixth meeting of the Goods and Services Tax (GST) Council commenced in New Delhi on Sunday in the shadow of demonetisation, whose fallout has put a serious question mark on implementing GST by the central government`s targeted deadline of April 1, next year.

The two-day meet will seek to finalise three legislations -- Central GST, Integrated GST and the Compensation law -- after which these will be placed in Parliament.

The Council`s fifth meeting in New Delhi earlier this month failed to break the deadlock between the Centre and the states on the issue of dual control on assesses in the proposed pan-India indirect tax regime.

At the meeting then, the states continued to highlight the impact of the November 8 demonetisation of high-value currency on their respective economies to underline that it is not the appropriate time to implement GST that, they could have a destabilising effect on the economy.

Besides, the Centre continues to be intransigent on the issue of jurisdiction over assessees, the states maintain.

"From an estimate that I have, the growth rate in aggregate will fall over 3% and arrive at 4.3%," he told a TV news channel.

Mitra, who is Chairman of the Empowered Committee of State Finance Ministers and member of the GST Council, also said that the postponement of the Goods and Services Tax (GST) regime could be an option to stabilise the economy badly hit due to demonetisation.

"Should we rethink of stabilising the economy from this big hit resulting from demonetisation and then go for GST? Do we take the risk of a second whammy at this stage," he asked.

Kerala Finance Minister Thomas Isaac said on Friday that implementing GST by the April 1, 2017, deadline planned by the Union government appears to be unlikely.

"Demonetisation has indeed vitiated the whole atmosphere," Isaac, who is a member of the GST Council, told BTVi channel in an interview.

"Discussions in the GST Council have been cordial, in a spirit of consensus and Parliament had passed the Bill unanimously. Now there is no such general atmosphere, Parliament is divided," he said, referring to the almost continuous disruption of proceedings being witnessed during the winter session on the demonetisation issue.

"Demonetisation is a big strike on the revenues of the states, and in Kerala, we are estimating our revenues to decline by 40% from impact of demonetrisation," he added.

Isaac also said that in a situation where the states are going to lose the right to tax when GST is implemented, and had acceeded to the Centre on almost all issues, "the Centre will have to take one step back from the position they have adopted" on the only remaining issue of "cross-empowerment" concerning jurisdiction over assessees.

"It can`t be a one-way traffic. Why can`t the Centre accomodate on the question of how GST should be administered," he asked.

With five meetings of the GST Council having been held, the issue of dual control or who will exercise control over GST assessees -- the Centre or the states - remains critical.

"It is unlikely that we will decide on the issue when we meet on (December) 11th and 12th," said Isaac.

The states want exclusive control on businesses with turnover below Rs 1.5 crore (the current threshold for central excise), including the service taxpayers.

The target rollout of GST will depend on the passage of the Central GST and the Integrated GST (IGST) bills in Parliament and the state GST bills by the respective states.

Parliament and state assemblies have the right to accept, or reject, the Council`s recommendations in their GST Bills.