The GST Council comprising of the Finance Ministers' of the Union and the State Governments has had three detailed meetings spread over several days. 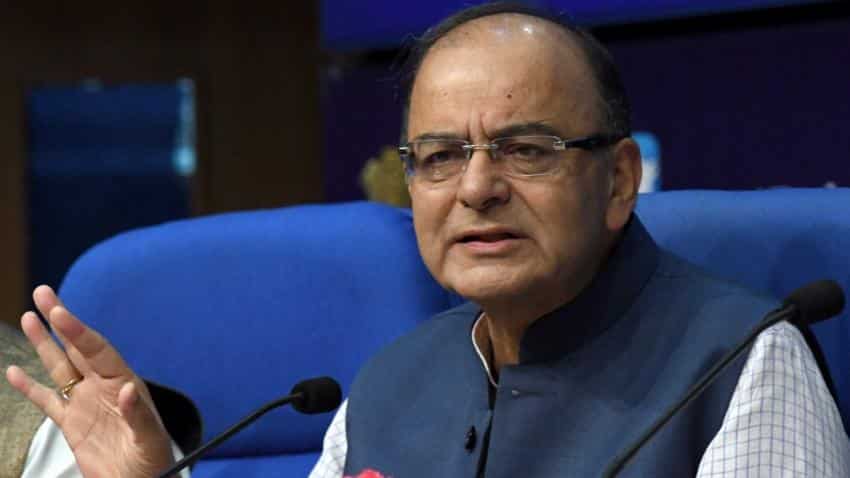 It has been proposed to the Council that there should be a four slab multi-rate tax structure. Photo: IANS

Finance Minister Arun Jaitley last week had said that the Goods and Service Tax (GST) Council will be meeting again on November 3-4 to decide the GST rate structure.

GST Council meet held on October 18 and October 19. During the meet, the council had suggested that the four slabs structure will include 6, 12, 18 and 26% with lower rates for essential items and highest band for luxury goods, even as it reached consensus on payment of compensation to states.

On Thursday, Jaitley in his blog pointed out two issues before the GST Council meet.

Here is the full text of his blog:

The GST Council comprising of the Finance Ministers' of the Union and the State Governments has had three detailed meetings spread over several days. Two more meetings are proposed post Deepawali. The meetings have witnessed an intense debate on several issues, which has been an excellent example of ‘deliberative democracy’. Opposing viewpoints have ended up in convergence and so far all issues have been decided by a consensus. Some critical issues are pending before the GST Council for a final decision. Comments have been made in the public space with regard to two of these issues. Even though the final decision with regard to these two issues is yet to be taken by the GST Council, the rationale behind the proposals placed before the Council needs to be explained.

It has been proposed to the Council that there should be a four slab multi-rate tax structure. Items constituting nearly 50% of the weightage in the Consumer Price Index basket (mainly food items), are proposed to be exempted from the levy of the GST. There will be a zero tax on such items. The object of this is to ensure that the GST structure is not regressive or burdensome on the common man.

Of the balance items, a tax rate of 6%, 12%, 18% and 26% has been suggested. The principal rationale behind this tax structure is that items which are presently taxed at rates closer to the range of each of the slabs will be fitted into the particular rate of the slab. Those presently taxed below 3% as the total tax of the Centre and the States will be taxed at a zero rate. Those between 3-9% will be taxed at a 6% rate, those between 9-15% will be taxed at 12% and there would be a standard rate of 18%. Some have suggested that multiple tax rate is disadvantageous to the GST and would neutralise some of the advantages of a uniform tax structure. The reality is that a multiple tax rate in India is inevitable for several reasons.

Different items used by different segments of society have to be taxed differently. Otherwise the GST would be regressive. Air conditioners and hawai chappals cannot be taxed at the same rate. Total tax eventually collected has to be revenue neutral. The Government should not lose money necessary for expenditure nor make a windfall gain. The tax on some products in a narrow slab regime will substantially increase. This would be highly inflationary. A commodity being taxed by the Centre and the State at 11% at present will be taxed at 12%. If it's taxation is suddenly raised on standard rate of 18%, it would disrupt the market and would be highly inflationary.

There are presently several items mainly used by the more affluent which are currently taxed at a VAT of 14.5% and an excise of 12.5%. If the cascading effect of these taxes and octroi is added, then range of taxation of these products is between 27-31%. It has been proposed to the Council to fix the rate of these items at 26%. Some of the items which are now being used by the lower middle classes will eventually be proposed to be shifted to the 18% bracket. With regard to demerit and luxury goods which are taxed globally at a higher rate, no rebates are contemplated. Each good would be taxed on the basis of its own demerit.

The gains of GST would necessarily involve that there would be a seamless transfer of goods and services across the country. The biggest advantage of GST actually lies in the GST design itself which provides for seamless transfer of input tax credit across the value chain. Most commodities would be taxed at lower than present levels. On some cases because of the tax rate going down and cascading of tax on tax going away, higher compliance levels which would reduce the level of non-compliance. The net gains of a more efficient tax would be felt over a longer period of time once the implementation glitches are all resolved. Hopefully with higher compliances and more revenue after the initial period, the GST Council would continue to have a look at the expenditure requirement and the tax likely to be collected and rationalise the tax rates and the structures in future.

It may be noted that some developed countries which do not have any section of the population below the poverty levels and where economic standards are high, have fewer tax slabs but many of them have 3-4 slabs. I am annexing to this blog an illustrative list of some of the countries which fall in this category.

The GST will result in the consuming States increasing their revenues from the very first year onwards. The GST Council has fixed a 14% revenue growth as a uniform, secular growth rate for all States. The revenue loss, if any, of a State has to be calculated on this basis. Some producing States may lose marginally in the initial years. The Constitutional amendment guarantees a five year compensation to these States. The moot question is as to how is this to be funded by the Central Government? If the Central Government has to borrow money to fund the compensation, it would add to its liability and increasing the cost of borrowing by the Centre, the State Governments and the private sector. There is no rationale for increasing direct tax for this purpose. Theoretically, it has been argued that the compensation be funded out of an additional tax in the GST rather than by cess.

Assuming that the compensation is Rs.50,000 crores for the first year, the total tax impact of funding the compensation through a tax would be abnormally high. A rupees 1.72 lakh crore of tax would have to be imposed for the Central Government to get Rs.50,000 crores in order to fund the compensation. 50% of the tax collected would go to the States as their GST share and of the balance 50% in the hands of the Central Government and 42% more would go to the States as devolution. So out of every 100 rupees collected in GST only 29% remains with the centre. The tax impact of this levy would be exorbitantly high and almost unbearable. The alternative proposal is to have a cess account and continue same existing levies as cess for a period of five years before subsuming them as tax. This would include clean energy cess and cesses on luxury items and tobacco products, which in any case, presently also pay levy higher than 26%. This would ensure no additional burden on the tax payer and yet be able to compensate the losing States. It may further be noticed that benefitting States are not compensating the losing states. The Centre, as a non-beneficiary, has to compensate and the proposal for continuing existing cesses for five years to the extent of compensation required is the more benign way of compensating the losing States without burdening the tax payer.

These are only at the proposal stage and would be discussed at length in the meeting of the GST Council early next month.