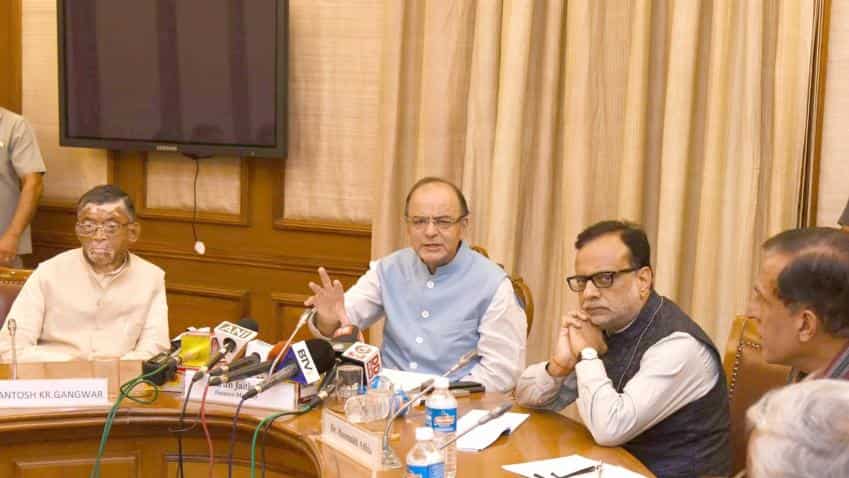 Union Minister for Finance and Corporate Affairs Arun Jaitley briefs the media about the outcome of the second meeting of the GST Council in New Delhi on September 30, 2016. Image Source: IANS/PIB
Written By: PTI
RELATED NEWS

In signs of fracture, the Centre and states on Friday disagreed on decisions reached at the first meeting of the GST Council on service tax assessment although they reached a consensus on area based exemption in the new tax regime.

The second meeting of the all-powerful GST Council, headed by Finance Minister Arun Jaitley, agreed on five subordinate legislations dealing with issues ranging from registration to invoicing under the new Goods and Service Tax (GST) regime.

It also agreed on the treatment of exemption from GST. Currently, the Centre gives exemption to 11 states mostly in North East and hilly regions from excise duty as also many states give the same as incentive for setting up industry.

The council decided that under GST, which will subsume excise duty and value added tax (VAT) among other levies, taxes will have to be collected and it can be reimbursed from the annual budgets to the exempted categories.

But there were divisions over ratifying or approving the minutes of the first meeting of the Council, held last week, after at least two states disagreed with what was documented as decided on the Centre's assessing 11 lakh service tax filers in the new dispensation.

"That discussion was inconclusive and therefore, it will continue in the next meeting on October 18," Jaitley told reporters.

Non-ratification of even one item on the minutes means the whole minutes are not agreed. Initially, it was thought that the minutes should be put to vote as those objecting to them were far less than those agreeing but Jaitley wanted to take decisions with consensus and so it was postponed.

Uttar Pradesh's Minister for Vocational Education and Skill Development Abhishek Mishra said the minutes were not approved in entirety.

The second meeting of the GST Council finalised rules for registration, rules for payments, returns, refunds and invoices.

With this as many as six issues have been settled by the GST Council, that has representatives of all the states, in two meetings in a span of one week.