The Ministry said that the bill was first discussed in the report of the Kelkar Task Force on indirect taxes. 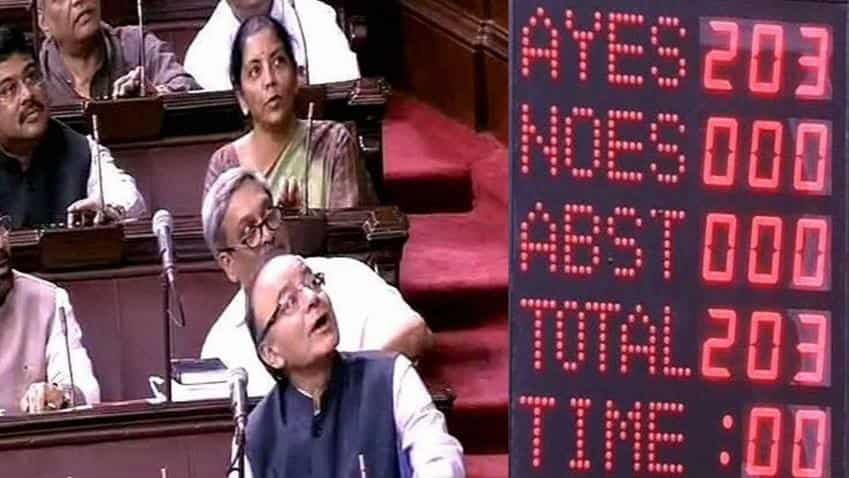 The most-awaited Goods and Service Tax (GST) Bill was cleared by Rajya Sabha on Wednesday. The 16-years long journey of the Bill was not easy.

Yesterday afternoon, when the Bill was tabled in Rajya Sabha, Ministry of Finance released an FAQs regarding the bill.

The Ministry said that the bill was first discussed in the report of the Kelkar Task Force on indirect taxes.

Here are the major chronological events that led to the introduction of GST:

1. In 2003, the Kelkar Task Force on indirect tax had suggested a comprehensive Goods and Services Tax (GST) based on VAT principle.

2. A proposal to introduce a National level Goods and Services Tax (GST) by April 1, 2010 was first mooted in the Budget Speech for the financial year 2006-07.

3. Since the proposal involved reform/ restructuring of not only indirect taxes levied by the Centre but also the States, the responsibility of preparing a Design and Road Map for the implementation of GST was assigned to the Empowered Committee of State Finance Ministers (EC).

4. Based on inputs from Govt of India and States, the EC released its First Discussion Paper on Goods and Services Tax in India in November, 2009.

5. In order to take the GST related work further, a Joint Working Group consisting of officers from Central as well as State Government was constituted in September, 2009.

6. In order to amend the Constitution to enable introduction of GST, the Constitution (115th Amendment) Bill was introduced in the Lok Sabha in March 2011. As per the prescribed procedure, the Bill was referred to the Standing Committee on Finance of the Parliament for examination and report.

9. The Empowered Committee in the Bhubaneswar meeting also decided to constitute three committees of officers to discuss and report on various aspects of GST as follows:-
(a) Committee on Place of Supply Rules and Revenue Neutral Rates;
(b) Committee on dual control, threshold and exemptions;
(c) Committee on IGST and GST on imports.

11. The final draft Constitutional Amendment Bill incorporating the above stated changes were sent to the Empowered Committee for consideration in September 2013.

13. The 115th Constitutional (Amendment) Bill, 2011, for the introduction of GST introduced in the Lok Sabha in March 2011 lapsed with the dissolution of the 15th Lok Sabha.

14. In June 2014, the draft Constitution Amendment Bill was sent to the Empowered Committee after approval of the new Government.

15. Based on a broad consensus reached with the Empowered Committee on the contours of the Bill, the Cabinet on 17.12.2014 approved the proposal for introduction of a Bill in the Parliament for amending the Constitution of India to facilitate the introduction of Goods and Services Tax (GST) in the country. The Bill was introduced in the Lok Sabha on 19.12.2014, and was passed by the Lok Sabha on 06.05.2015. It was then referred to the Select Committee of Rajya Sabha, which submitted its report on 22.07.2015.