ATM cash crunch: The FIU has upgraded its FINEX server in recent past, which will help it by sending alerts related to real-time transactions as well as suspicious transactions. In addition, the Income Tax department, which is in action has been raiding and surveying at several states that are suffering from the cash crisis. 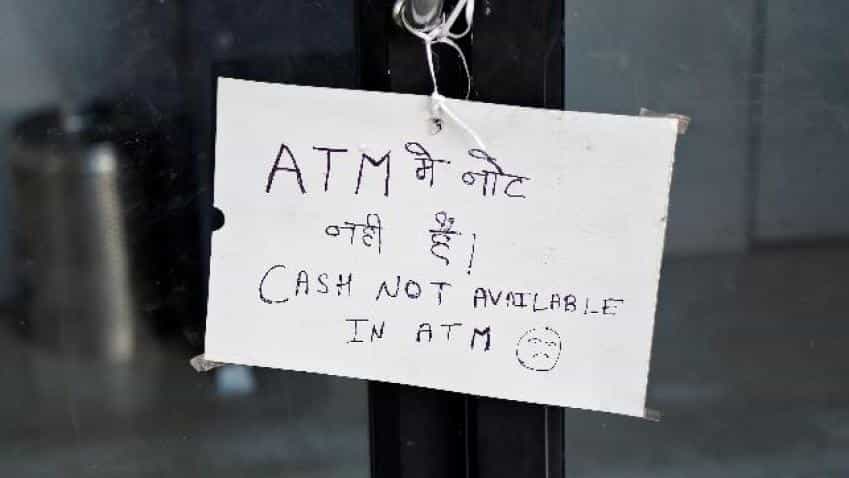 ATM cash crunch: The paucity of cash in the banks and ATMs has turned into a big concern and the government is planning not to spare those responsible for the crisis. Image source: Reuters
Written By: ZeeBiz WebTeam
RELATED NEWS

ATM cash crunch:  The paucity of cash in the banks and ATMs has turned into a big concern and the government is planning not to spare those responsible for the crisis. Sources close to the development have informed Zee Business that a multi-agency task force will be set up under the Prime Minister's Office (PMO) and it has been asked to investigate the matter thoroughly. The seriousness of the intent of the government can be gauged from the fact that the task force has been asked to submit its report within 15 days.

Reports suggest that there is a feeling at the highest levels that the hype around currency shortage is being created to mislead the nation, at least when enough cash is available in the country. It is being viewed as a political conspiracy to mislead the nation, especially as it is an election year.  However, the Finance Ministry has already said that the reason behind the crisis will be known only after a detailed report on the issue has been prepared. Its action will be dependent on the outcome of the report.

The exclusive IB report also suggests that the banks have been asked to submit the report on any and every suspicious transaction as well as a suspicious activity to the FIU, at the earliest. It says, Red Flag Indicators have been inserted in small and inactive bank accounts, to get an information related to multiple withdrawals from these accounts through immediate alerts, which is being monitored at the control room of the FIU.

The FIU has upgraded its FINEX server in recent past, which will help it by sending alerts related to real-time transactions as well as suspicious transactions. In addition, the Income Tax department, which is in action has been raiding and surveying at several states that are suffering from the cash crisis.

Besides, the banks have been advised to conduct an internal forensic audit of the transactions and a team of senior bank officers has also been formed in each bank to monitor every activity of its branches. Instructions have been given to all banks to submit its balance report, balance status, cash report, reports of Jan Dhan accounts and zero balance accounts on the daily basis. Reports related to suspicious accounts and their transaction information have been sought separately.

Under the process, the alerts will be first sent to a senior official of the branch and then it will be sent to the head office of the bank and later to the FIU, which will be responsible to share the alert with the concerned department. All transactions are checked on all parameters of the Anti-Money Laundering Act.

To ensure the digital trail of the notes, a Transition monitoring system (TMS) has been created, which will be providing all information related to the banknotes, .i.e., the place from where it was supplied, consumed, re-deposited in the banks, the account to which it was deposited among others.Apart from this, the banks have also been asked to monitor through the custom identity management system, which includes CCTV and other methods.

Other steps being taken to find the loopholes and identify the culprits of this cash crisis includes an immediate alert to concerned authority in cases where transaction amount goes above Rs 10 lakhs and customs departments at airports and ports have been alerted and asked to monitor any undeclared foreign currency. Air Intelligence Unit is coordinating with the rest of the agencies and this coordination has led to arrest in many places.

A monitoring committee has been created in the Ministry of Finance to monitor the activities of government employees. The committee includes intelligence, revenue officers along with members from other agencies.

George Clooney: I was bad in ''Batman & Robin''

Drew Barrymore: Cooking is very dear to my heart

Voting underway in 2nd phase of DDC polls in JK

Captaincy not affecting Kohli, others have to step up: Harbhajan