About 10 lakh bankers have observed one-day strike across India on Tuesday to protest against the government's "anti-people banking reforms" and to press their demands to the government for compensation for the extra work done during the demonetisation period. 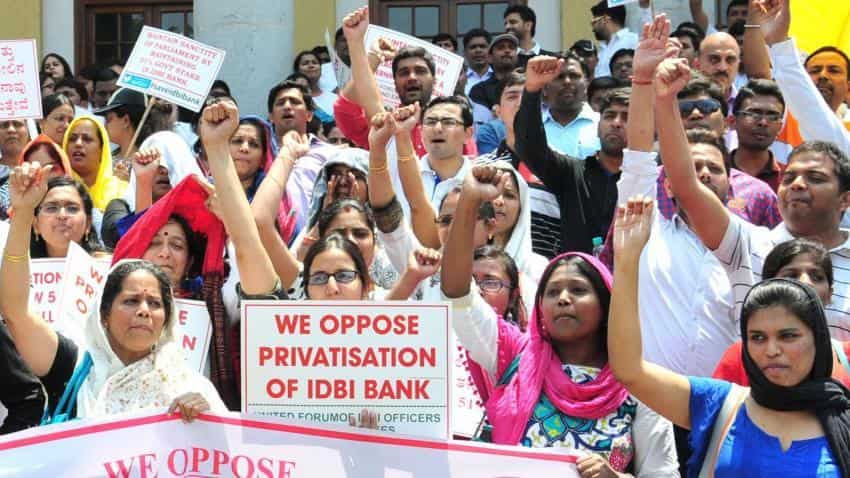 About 10 lakh bankers have observed one-day strike across India to protest against the government's "anti-people banking reforms" which has brought the country's banking operations to halt on Tuesday.

The United Forum of Bank Unions (UFBU), which comprises of nine unions into the banking sector, has called the strike.

"Fixing accountability for bad loans and taking action against the bank officials and wilful defaulters are the need of the hour and not formation of a `bad bank`," he added.

"The strike has been forced on us because of adamant and insensitive attitude of the bank management and Indian Banks Association (IBA). They even did not bother to talk on providing compensation for extra hours put in by bank staff during the demonetisation period," PTI reported quoting AIBEA's Venkatachalam as saying.

Besides, cash transactions would also be hit and the ATMs are likely to be emptied early during the day, cited the IANS report on Tuesday.

Here are  key things to know about the banking strike:

3. Around 10 lakh bankers-ranging from officers to clerks- belonging to the nine unions will join the strike, IANS reported citing AIBEA general secretary Venkatachalam

4 .The strike will include bank employees and officers in all public sector banks, including State Bank of India (SBI), all old-generation private banks, foreign banks, Regional Rural Banks and Co-operative banks

5. According to AIBEA's Venkatachalam, the strike call comes after all attempts to find a solution to the demands raised by the unions yielded no results

6. Venkatachalam said clearance of 40 lakh cheques totalling around Rs 22,000 crore would be affected

7. Top private lenders -- ICICI Bank, HDFC Bank and Axis Bank -- are not part of the union and will continue to function normally but cheque clearances would not take place, IANS reported.