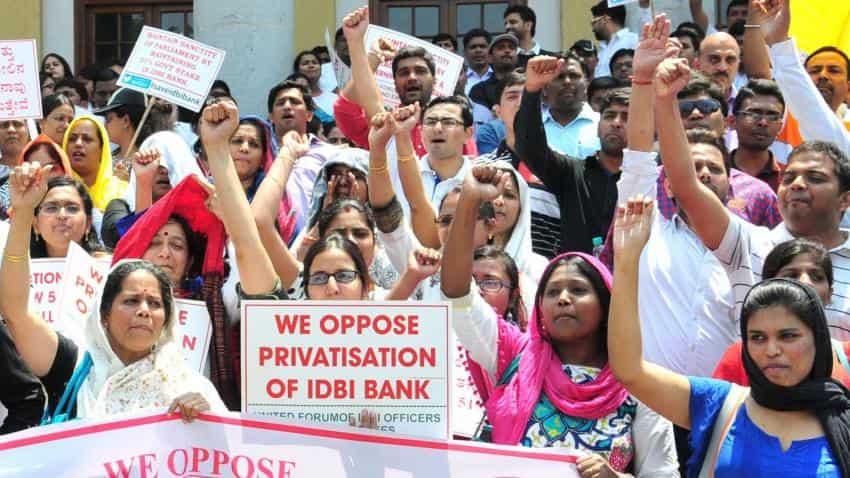 Striking employees of IDBI Bank stage a demonstration against the central government's proposal to reduce its holding in the bank to less than 50 percent in Bengaluru, on March 29, 2016. Representational Image. Image Source: IANS
Written By: PTI
RELATED NEWS

Bankers to go on strike next month against anti-labour measures, says AIBEA

Around 17,000 employees of the troubled state-run IDBI Bank, that has been reporting heavy losses on rising bad loans for several quarters now, have threatened to go on a nationwide strike if the management fails to conclude a new wage pact before the month-end.

The salary revision of IDBI Bank employees, who do not come under the Indian Banks Association's (IBA) industry-wide wage settlement, had been pending since October 2012. Since then the unions and IDBI Bank management could not conclude a new wage pact as the latter was awaiting IBA wage agreement.

"We are shortly going to write to Managing Director Kishor Kharat seeking his intervention. If the bank management does not call them (unions) for negotiation before October 31, we may go for agitation which includes one-day strike in November," IDBI Bank Officers Union General Secretary Vithal Koteswara Rao told PTI.

Last May, the IBA, the apex body representing bank managements, signed a wage settlement with unions and officers associations of 43 lenders, including public sector ones, old private banks and a few foreign banks.

Under this, banks offered a 15% increase in salary and allowances. This revision was effective from November 2012 and valid for five years.

"Our last wage revision was applicable till October 2012. The management was waiting for IBA wage settlement which was finalised in May 2015. After this, we had three rounds of negotiations and were offered a 4-5% increase in our gross salary (CTC), excluding allowances. But we are demanding a revision not less than 15%," Rao said.

The bank, however, said the negotiations are still on and there are some positive development towards reaching a settlement. It also refuted the officers' union claim of a 4-5% increase in gross cost to the company (CTC).

"Negotiations have not concluded with the unions but there is a lot of progress. We offered a higher percentage increase in wages and are now awaiting their reply," IDBI Bank Executive Director (HR) GA Tadas said.

Rao said before 2009, IDBI wages were somewhere close to that of Reserve Bank of India (RBI) staffers but the management in 2009 unilateral reduced it. In the last wage revision in April 2016, RBI employees wages were increased by 20%.

"We are not asking a revision equivalent to that of the RBI, but it should not be less than 15% which others in the industry have got," Rao said.

"Offering a 15% hike is not possible but we have offered them a revision somewhere close to it. Now, they have to get back to us," Tadas said, adding the management last week had fruitful talks with lower division employees.

Bankers to go on strike next month against anti-labour measures, says AIBEA