Vishal Sikka's three year stint at Infosys comes to an end; A snapshot of company's performance in this time

Infosys has accepted the resignation of Dr Vishal Sikka as the Managing Director and Chief Executive Officer with immediate effect. 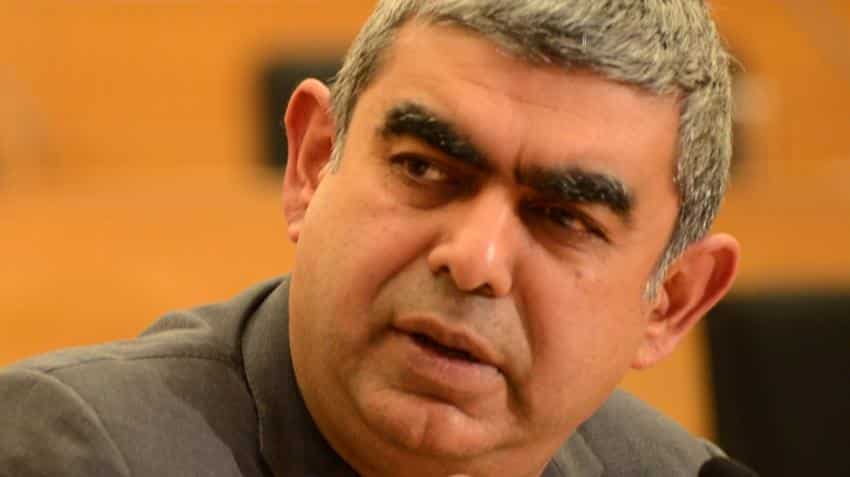 Infosys shares dropped over 7% on Friday morning after Vishal Sikka resigned from his post of CEO and MD of the IT major. This would be the highest fall in Infosys stock price since March 29, 2014.

It all started in the morning at around 9.09 am of Friday, when Infosys intimated the stock markets that the company as accepted the resignation of Vishal Sikka as the Managing Director and Chief Executive Officer with immediate effect.

Sikka was appointed as Executive Vice-Chairman at a salary of $1 till the time company found his replacement.

UB Pravin Rao will act as the interim-Managing Director and Chief Executive Officer.

Sikka reiterated his belief in the great potential of Infosys, but cited among his reasons for leaving a continuous stream of distractions and disruptions over the recent months and quarters, increasingly personal and negative as of late, as preventing management's ability to accelerate the company's transformation.

In a press release on Friday August 18, 2017, Infosys said, "Infosys has, under the leadership of Vishal, developed and articulated a strategy to transform itself to meet the rapidly changing needs of the marketplace in the 21st century. The Company was lagging significantly behind industry in growth rates when Vishal took over and now we are in top quartile from a performance perspective."

On January 03, 2017, Sikka cautioned Infosys employees and said, “Brexit, the American Presidential Election, demonetisation, cyber security, the refugee and terrorism situation, and many others. There were events that seriously changed the way we viewed the world, but perhaps that biggest disruption is the one that has been proceeding irreversibly and unstoppably in our times - the accelerating force of technology and digitisation."

On February 8, 2017, media reports surfaced that claimed Infosys founders including Narayana Murthy, Kris Gopalakrishnan and Nandan Nilekani had written to the board in January 2017 expressing their concerns over pay hike to CEO Vishal Sikka, and the severance package offered to two senior executives.

Infosys' CEO Vishal Sikka in FY17 received a salary of Rs 43 crore. This was 61% of the promised compensation for the fiscal year. Sikka was eligible for a Rs 70 crore ($11 million) salary which included basic salary, variable pay, restricted stock units (RSUs) and performance stock options for the year.

He was one of the highest paid executives in the Indian IT industry.

The board of Infosys on Friday said, “The Board is profoundly distressed by the unfounded personal attacks on the members of our management team that were made in the anonymous letters and have surfaced in recent months."

Infosys today said, “When Sikka took over, the Company was lagging behind industry growth.”

Under Sikka's leadership, Infosys consolidated revenue and net profit grew at a compounded annual growth rate (CAGR) of 8.11% and 7.75%, respectively.

In dollar terms, Infosys revenues have grown from $2.13 billion in Q1FY15 to $2.65 billion this past Q1. Infosys said, "This was done while keeping a strong focus on margins, closing this past quarter at 24.1% operating margin, beating some competitors for the first time in many years, and improving against nearly everyone in the industry."

It further said, "The revenue per employee of the Company has grown for six quarters in a row. Attrition has fallen, from 23.4% in Q1FY15 to 16.9% this past Q1, and high performer attrition is much lower than the overall Company attrition."

Infosys said, "The Company grew its $100M+ clients from 12 in Q1FY15, to 18 this past Q1, and increased its large deal wins from $1.9 billion in FY15 to $3.5 billion this past year. This has all been done while improving overall utilisation (excluding trainees), to a 15-year high this past quarter, and an all-time high including trainees, while improving our cash reserves, rewarding Infoscions with a new equity plan, and returning Rs 19,000 crore as dividend (including dividend distribution tax) over the last three years. This has all been done while improving standing with clients, to the highest ever in the 12 years with a jump of 22 points in CXO satisfaction."

Further, Sikka in Infosys nurtured new programs to drive innovation, education and entrepreneurship on a large scale. These programs included (i) Zero Distance, a program which was the first of its kind in the industry intended to drive grassroots innovation at a massive scale, through every employee, (ii) Design Thinking training, the largest program of its kind to drive creative confidence and problem-finding in every Infoscion, and (iii) Zero Bench, a bold notion of leveraging the bench as a means to drive additional value for clients.