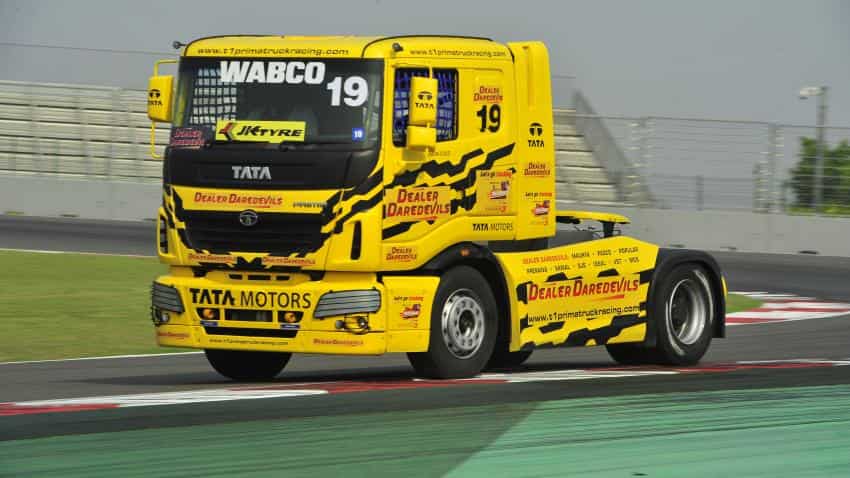 Tata Motors on Tuesday announced that it will showcase an all-new powerful 1000 BHP T1 Prima race truck in season 4 of the T1 Prima Truck Racing Championship, which is the Indian commercial vehicle races.

The all-new 1000 BHP T1 Prima race truck will further add exciting dimensions of speed and character to T1, said the company. It is similar to race trucks that compete under the broad umbrella of the FIA in the UK and Europe.

The engine of the all-new 1000 bhp T1 race truck is being developed in collaboration with Cummins Inc of the US enabling Tata Motors to not only set new benchmarks in T1 and the sport of truck racing, but in the Indian CV space. The new T1 race truck is the most powerful truck built in India by far, says the company.

It has been developed to deliver power and acceleration of 0-160 km/hour within 10 seconds and a torque of 3500 Nm, the new T1 race truck is based on a 12 litre ISGe Cummins engine, mounted in the center of the chassis for equal weight distribution, with enhanced fuel delivery and air flow, producing 1040 HP.

The power is managed by an all-new ZF 16-speed gear box, making it fastest race truck developed by Tata Motors.

Ravindra Pisharody, Executive Director – Commercial Vehicles, Tata Motors, said, “After having hosted three successive T1 seasons, we at Tata Motors are happy to announce our next big innovation in the form of the 1000 bhp T1 PRIMA race truck. Built with specifications similar to that of trucks that race globally, the vehicle was developed in a record time 12 months – a demonstration of teamwork, speed and capability. With this new track based machine, we are truly ahead of contemporary; we are FUTURE READY and through T1 we’ve proved time and again to showcase a distinctive partnership between sporting and technological excellence for the Tata Motors brand.”

In India, Tata Motors and Cummins Inc, USA, have a joint venture company called Tata Cummins Pvt. Ltd, established in 1994, developing high performance, reliable and durable engines in the range of 75 to 400 HP.

Season 4 of the T1 PRIMA Truck Racing Championship will be held on Sunday, March 19, 2017, at the Buddh International Circuit (BIC), Greater Noida.