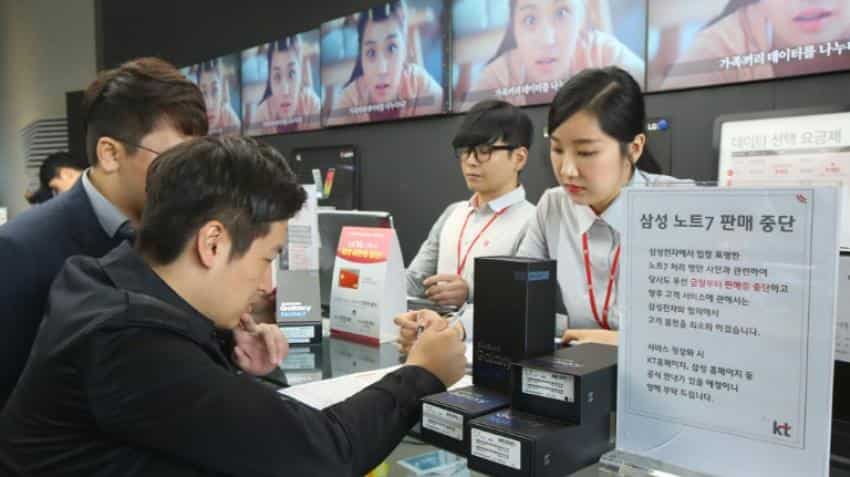 "Moving forward, Samsung Electronics plans to normalise its mobile business by expanding sales of flagship models such as the Galaxy S7 and Galaxy S7 edge," the company said in a statement. Image Source: AFP
Written By: AFP
RELATED NEWS

Samsung on Friday said the crisis over its exploding Note 7 smartphones would cost another $3 billion-plus (nearly over Rs 19,958.3 crore) in lost profit over the next two quarters, but hoped expanded sales of its other flagship handset would help cushion the impact.

After a recall problem with the large-sized Galaxy Note 7 turned into a full-blown crisis, Samsung announced earlier this week that it was scrapping the model entirely -- a devastating move for a company that prides itself on the quality production of cutting-edge technology.

On top of the third-quarter loss, Samsung said the drop in sales arising from the decision to discontinue the Note 7 would continue to impact profit margins in October-March -- including the crucial holiday buying season.

"Moving forward, Samsung Electronics plans to normalise its mobile business by expanding sales of flagship models such as the Galaxy S7 and Galaxy S7 edge," the company said in a statement.

Samsung announced a recall of 2.5 million units of the oversized Galaxy Note 7 smartphone in early September after several devices exploded or caught fire.

When replacement phones also started to combust, the company eventually decided to kill off the Note 7 for good.

The company blamed faulty batteries made by an unnamed supplier -- widely believed to be its sister company Samsung SDI.

But numerous experts and analysts said the problem may have been with the handset's underlying technology, and Samsung's decision to rush the launch of the smartphone ahead of the latest iPhone from arch-rival Apple.

In its statement, Samsung vowed to "focus on enhancing product safety for consumers by making significant changes in its quality assurance processes."

Industry analysts have suggested the Note 7 fiasco could end up costing Samsung a great deal more, with major losses tied to the harder-to-calculate damage done to brand reputation.

"And this figure doesn't take into account the huge marketing costs for Samsung to win back customer loyalty and to regain the trust of mobile carriers," said Greg Roh, an analyst at HMC Investment Securities.

"It will have to spend a lot of money to recover and much work has to be done."

The stock market, which has largely factored in the inevitable profit hit Samsung will be forced to take, reacted calmly to Friday's announcement.

Samsung's share price dropped 0.4% at the opening bell, but then recovered to move into positive territory, up 0.5%.

S R Kwon, an analyst at Dongbu Securities, said Samsung's loss forecast was largely aimed at muting speculation as to just how bad the profit downturn was likely to be.

"Samsung want to get the discussion over with. It's like they are telling the market: 'Stop speculating about something you don't know'," Kwon said, adding that the final fourth-quarter (Q4) earnings would be critical for assessing the real damage done by the crisis.

"Then we'll know whether it was able to cover the loss with its other models," he said.