The crippling driver strikes at the beginning of 2017 has provided the boost for the auto-rickshaw category to evolve and become a large part. 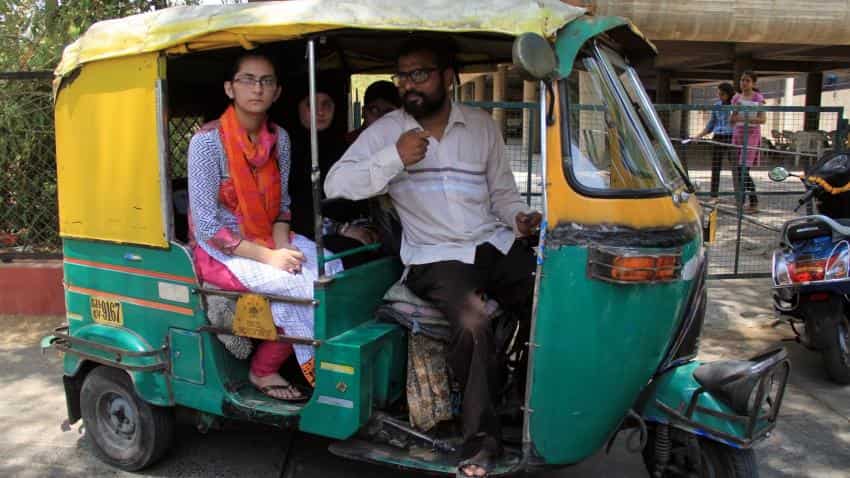 Farhana Bavani, who topped in Class XII exams (Science Stream) conducted by Gujarat Board with her father Farooq Bavani an auto-rickshaw driver by profession in Ahmedabad on May 11, 2017. Photo: IANS
Written By: ZeeBiz WebTeam
RELATED NEWS

While driver strikes have crippled online cab aggregators such as Uber and Ola, the players are however seeing a greater demand for auto-rickshaws. The auto-rickshaw category has grown to become now a crucial part of the online commute booking market.

While the online auto-rickshaw market has historically operated in stops and starts, the crippling driver strikes at the beginning of 2017 provided the right tipping point for this nascent category to evolve, according to a RedSeer Consulting report.

The total auto-rickshaw rides delivered by online players has increased by a massive 250% in Q3 2017.

In fact, auto-rickshaw bookings made on online taxi-hailing apps have now amounted to a significant 10% of the total rides, including cabs, car-pooling shuttle buses, etc.

While the auto-rickshaw segment was a mere 3% of the online commute booking market in Q3 2016, it now makes up 10% and the rest 90% is the booking of cabs, car-pooling and others.

Ola Cabs was one of the first to start with the auto-rickshaw booking service on their app and others followed.

One of the main reasons for the growth in auto-rickshaw online booking is due to the lucrative offers.

The report says that lucrative offers such as Rs 29 fare for less than 4 km travel distance for this category has resulted in a growth of 3 times in the last one year.

However, this may be a good option for Ola and Uber especially in the Northern suburbs of Mumbai and in other cities such as Delhi and Bengaluru as cab supply is expected to persist.

The registered cab supply in Q2 2017 has declined to nearly 3 lakh from nearly 5 lakh cabs in Q4 2016, said a recent RedSeer report.

The reason for this was the cutting of incentives, commission rates and higher working hours that were not rolled back even after the cab drivers went on strike several times.