FMCG consumption worth $45 billion to be influenced by digital by 2020: Report 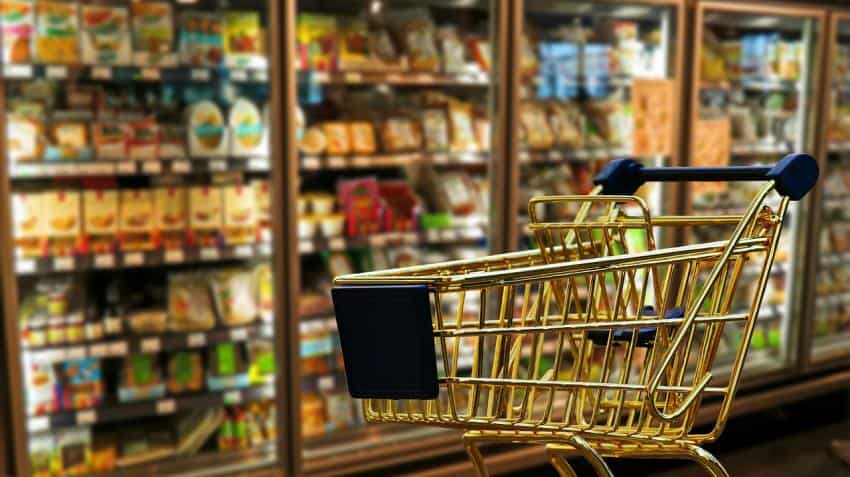 A shopping cart next to shelves of FMCG products. Photo: Pixabay

A report released on Wednesday by Google India and BCG projects that 40% of the Fast Moving Consumer Goods (FMCG) consumption in India will be driven digitally, translating to a value of $45 billion by 2020.

The report finds that while time spent on digital is the same as TV in urban India, share of digital advertising spends by FMCG companies was only 10% in 2016. This is, however, expected to grow substantially to reach 25 -30% by 2020. 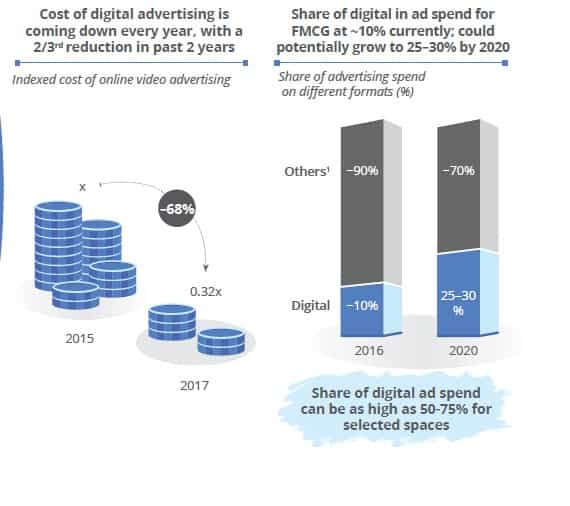 The Google India and BCG report, “Decoding Digital Impact: A $45B Opportunity in FMCG 2020”, captures the growth of digital influence and key consumer insights that will drive the next phase of FMCG segment in India.

The report highlights that there will be 650 million internet users by 2020, driven by increasing mobile penetration, with the highest growth coming from non-metros. Thereby reinforcing that digital in India is now a way to reach the masses, and not just a small, targeted opportunity.

This reach makes it central for FMCG companies and will influence categories such as Baby care and Beauty, the report said.

From an audience perspective, the report estimates that online consumers spend 2 times more on FMCG purchases than offline consumers. India’s 28 million affluent and elite households will contribute to about 40% of overall online FMCG consumption by 2020, of which 60-65% will be digitally influenced.

The ecommerce segment within FMCG is expected to grow to become a $6 billion market in 2020, on the back of assortment, convenience and availability along with discounting.

Sharing insights on customer preferences across metro and non-metro cities, the report predicts while availability of options is critical for users in large cities, consumers from tier 2 and 3 markets care more about factors such as express delivery and easy returns.

Even though the digital media has gained ground over the last two years, the spends on digital are still not in-line with the time spent by consumers on digital.

The lag in the spends can be allocated to multiple reasons such as lack of clarity on measuring the returns on digital, lack of expertise in the space or even inertia with traditional media. If these barriers are addressed, the share of digital in advertising in FMCG could potentially grow from about 10% to 25-30% by 2020, says the report.

In the last two years, the number of online video users has grown by 3 times and digital video reach is already 2/3rd of TV reach in urban areas.

Similarly, with the next wave of users coming in from non-metro cities, local language content is increasingly becoming important. There has been a 10 times growth in vernacular 'searches', over 2 times growth in watch time of vernacular YouTube content and 5 times faster growth of Hindi content consumption on websites versus English in the last one year.

Abheek Singhi, Senior Partner and Asia Pacific Head of Consumer Practice, BCG said, “Digital influence is no longer something in distant future - It is here and now. Like other markets - the urban India consumer already spends more time online than on print and TV. In FMCG, 40 percent of spend will be influenced digitally by 2020 and this will be driven by the 3 V's - video, vernacular and views & opinions.”

Vikas Agnihotri, Industry Director, Google India said, “FMCG was considered the last bastion for digital adoption but not anymore. It’s growing rapidly and much faster than the industry imagined. Mass Brands need mass reach and Online video today has the critical mass required for brands to drive business impact. Digital today is mainstream and we are seeing successful CPG companies investing behind not just media but insights and analytics to decode changing user journeys across categories.”