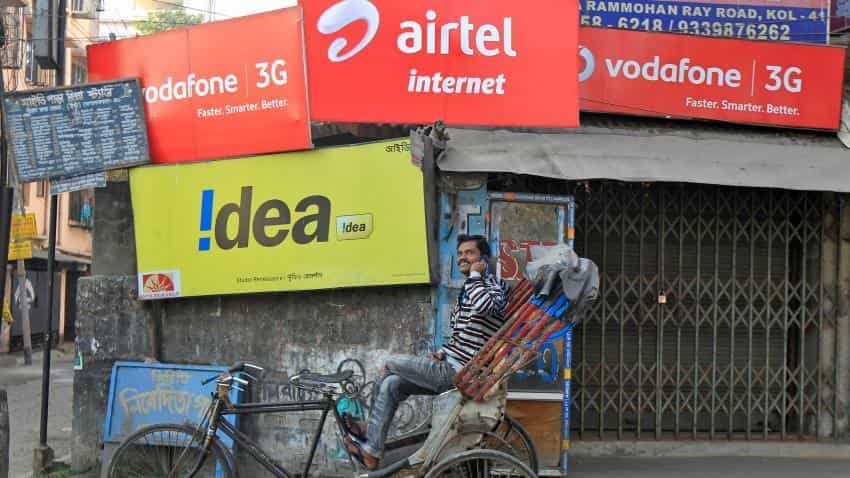 A man talking on his mobile phone near posters of Idea, Vodafone and Airtel. Photo: Reuters
Written By: ZeeBiz WebTeam
RELATED NEWS

While the market believes that concerns surrounding Reliance Jio's entry are overdone and pricing stability should return to the industry after it starts charging subscribers after March 31. However, research analyst firm Morgan Stanley believes Reliance Jio will remain a disruption for at least the next 3 years. It further believes that consolidation among telecom players will do little to stop Jio's efforts to capture subscribers.

Morgan Stanley believes that consolidation in the telecom market will not help incumbents regain the pricing power in the short term, since Jio is likely to be competitive in its bid to gain subscriber market share.

It pointed out that while consolidation has helped incumbent operators gain pricing power and improve profitability in markets such as Indonesia and the US, consolidation did not improve market dynamics in Germany and the UK, where the No. 3 and No. 4 operators (in terms of subscriber market share) merged to gain strength but maintained price aggression to gain subscriber market share.

“We believe developments in India may be akin to the Germany and UK telco market histories, with the disruptor remaining aggressive – and a No. 2 and No. 3 operator merger might not improve market dynamics over the short term; hence, pricing could continue to decline,” said the research firm.

The Morgan Stanley report further said, “We believe RJio will remain disruptive for at least the next 12-18 months, primarily with respect to competitive price offerings (as compared with current industry offerings).

We believe RJio's goal would be to achieve at least 15% subscriber market share – in-line with its spectrum market share, and, within that, a larger number of premium subscribers who will be high data consumers with the willingness to pay for bundled plans,”

The report says that a new entrant into the market is usually disruptive for three years after its launch. This is says will result in an 8% revenue market share loss and 10% subscriber market share loss.

“Our analysis of new entrants in Indonesia, France, Italy and the UK suggests that, on average, the entry of a new operator has been disruptive for incumbents for three years after its launch, resulting in 8% revenue market share loss, 10% subscriber market share loss, and 20% ARPU compression during the period,” it said.

It says that the competitive pressure could be elevated given Jio's attractive pricing relative to current industry pricing. Further, it has only been about six month since Jio disrupted the market, thus as this compared with global historical examples, represents the early stages of such a challenge. The pressures on incumbents could last for another 12-18 months.