Despite SIAM showing a recovery in passenger vehicle sales in January, a closer look shows the recovery is only for the top 5 car makers in India. 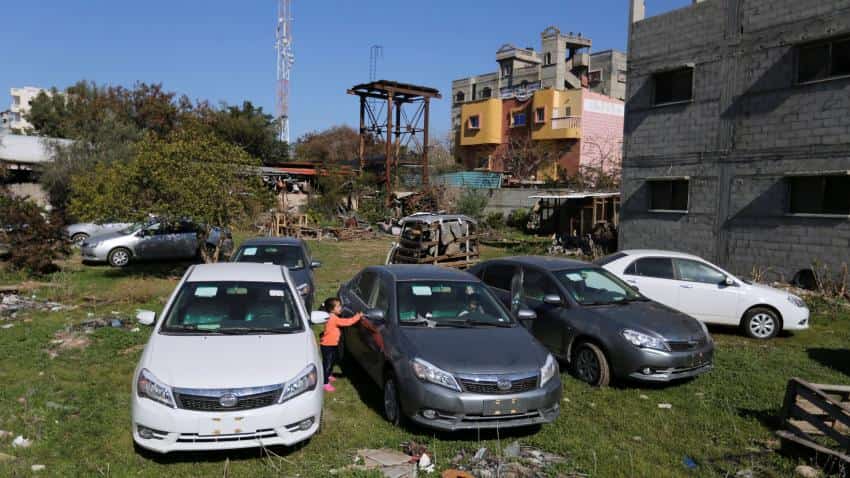 Passenger car sales showed signs of recovery with a 10.83% growth in sales during January from the biggest fall a month ago in December (since April 2014), according to recent data by the Society of Indian Automobile Manufacturers (SIAM). Total domestic passenger vehicle sales too grew by 14.40% during the month, as 2,65,320 units were sold in January this year as against 2,31,917 units sold during January 2016.

It seems that domestic passenger vehicle sales in the country which was shaken due to the impact of demonetisation in November and December 2016 has managed to recover quickly. This leaves only two-wheelers and commercial vehicle sales still trying to heal the wounds left by demonetisation.

However, this is not entirely the true as 7 out of the of the 15 automobile manufacturers in India posted a month on month decline in sales. This shows that the automobile industry has some way to go before it is fully on the road to recovery. 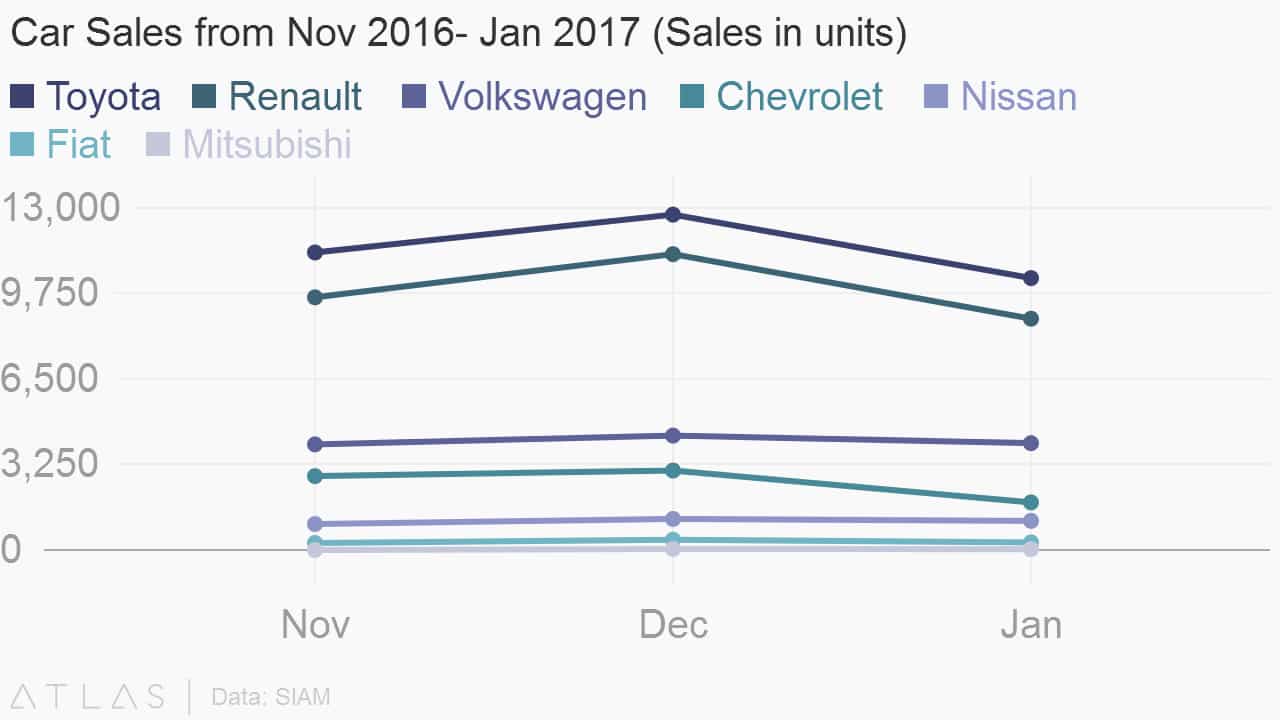 If this is the case then you may be wondering how come SIAM's sales figures posts such a large growth in sales during the month. First, it has to be noted that these are year on year figures. Even year on year saw a decline in sales of 6 manufacturers. However, month on month sales shows a much clearer picture of the impact of demonetisation and if the automobile companies have recovered.

The high sales in passenger vehicles is chiefly due to the high sales of the market leader Maruti Suzuki (which has 51% market share) during January. The top 5 carmakers in India have a massive 85.18% market share. This leaves the rest 10 automakers with less than 15% of the market and hence their growth and decline has a marginal impact on the overall sales growth numbers of car manufacturers in India. 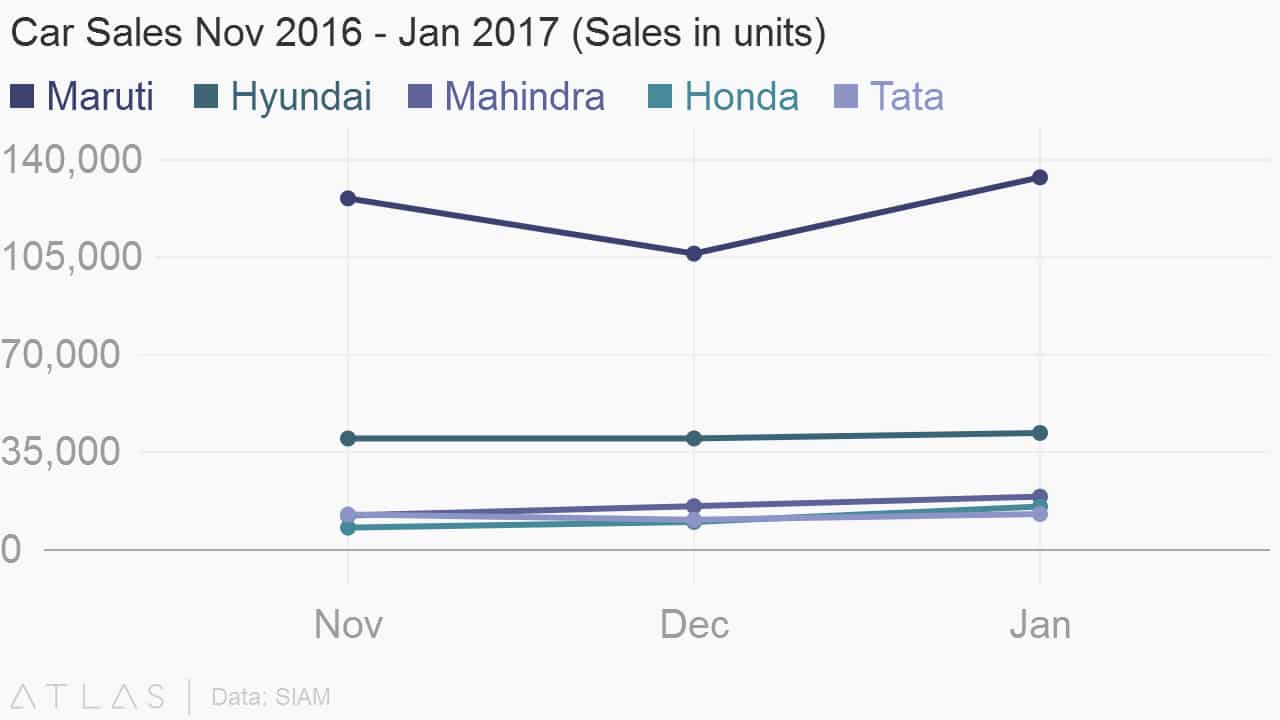 Except for Hyundai all the other car makers posted huge double digit growth in sales. This pushed up the overall sales growth of passenger vehicles during the month.

This shows that many of the car makers are yet to see any improvement in their month on month sales.

In December when the automobile industry was hit the hardest due to demonetisation the sales of the top 5 car makers had seen a drop or flat sales. For instance, market leader Maruti Suzuki posted a large 18.6% decline in sales MoM, which had a big impact on the overall passenger vehicle market. Others such as Tata Motors too saw a 17.4% MoM decline in sales and Hyundai's sales MoM stayed flat. Only

Mahindra and Honda managed to post a small MoM growth in sales during the month.

Questions to Toyota, Volkswagen, Chevrolet, Nissan and Mitsubishi went unanswered till the time of the publishing of this article.

Kevin Flynn - President and MD, Fiat-Chrysler Automobiles (FCA) India said, "We realigned our pricing strategy on our Fiat range in early January 2017. After the announcement we witnessed an uplift in inquiries and our dealers are working on converting them. Purchase decision to retail takes time and we expect higher sales over the next 2-4 months, hoping GST is implemented well. In fact, passenger vehicle retail sales across the industry are down in Jan by approximately 30% and this  In part is due to customers postponing their purchases due to the effect of demonetisation. The Union Budget announcement on Feb 1 also played a role in many customers deferring their purchase decisions. Until GST is implemented and its impact on the market is understood, we anticipate a conservative number of retails across the next few months."

This shows that the passenger vehicle segment recovery in January is due to the growth of only a few top automobile players and not the rest. Which means that the industry is far from recovery in terms of sales growth.