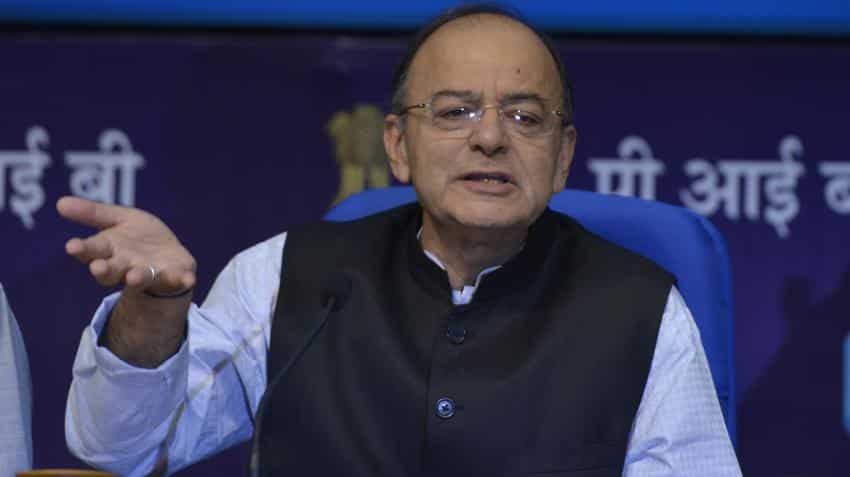 India's economic slowdown has bottomed out and now it should start moving upwards after recovering from the "temporary blip" seen during the recent structural changes, Finance Minister Arun Jaitley said today.

He acknowledged that there was a "temporary blip" as a result of structural changes that were initiated by the government.

"I think the bottoming out of the economy is complete and now it should start moving upwards. The global economy is also moving up," said Jaitly.

As part of the summit, Jaitley met the senior management of Morgan Stanley and addressed a gathering of senior fund managers and key financial institutional investors.

"How do I see the economy moving? our basic parametres are quite stable. And we grew between 7-8 per cent over the last three years, he said.

"Therefore, we need over the next, at least, a decade, if not more, significantly higher growth rates in order to go ahead with expansion plan of the Indian economy, Jaitley said.

The finance minister also assured investors of a strong banking sector in India.

"The combination of the IT scheme and now the large-scale recapitalisation we have announced should be put into motion expeditiously," he said.

The combination of these two steps are likely to improve the capacity of the banks, and even lend their surplus, particularly to the small and medium-scale industries which need those funds in abundance because they are the ones that are the big job creators and keep the Indian economy going, he elaborated.

He also clarified the often over-stated labour issues, saying these were no longer there as the negative environment of disruption of industrial activity is long over.

He said the labour laws are being fortified by taking the unions into consultation, and there has not been any significant labour resistance in recent times, whether it is disinvestment or privatisation, he said.

"We haven t encountered trade union resistance as that is concerned," he pointed out, adding that there are already various kinds of reforms.

Responding to questions from investors, he said among the privatisation of public sector units (PSUs), Air India is in a very advanced stage while some of the PSUs will be kept as they are.

The state enterprises in the oil and some in the power sectors will be kept as PSUs.

"But there are many which will be privatised, he added, pointing to a list prepared by the NITI Aayog.

"In any case, we are going with the divestment programme very actively, said the minister.

He also gave the investors an update on the ongoing business reforms, and called for investments for changing the landscape of India with an accelerated pace.

Jaitley, who is on a two-day visit to Singapore, held meetings with Singapore ministers and investors.